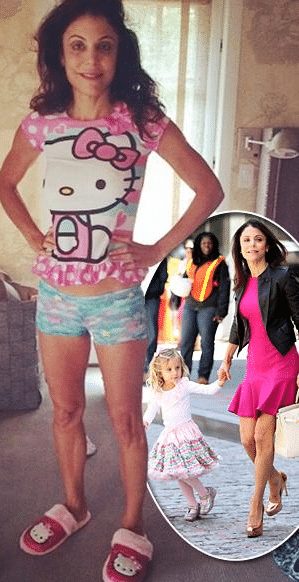 Bethenny Frankel aka Skinnygirl mogul over the weekend decided to post a selfie of herself wearing her 4 year old’s daughter’s pajamas with the interesting text, ‘This is my daughter’s nightgown and PJ shorts. Think we’re ready to start sharing clothes yet?’

Which forced the awkward question what exactly was the former reality actress up to and why had she chosen to share that particular image? Which is to openly wonder is there something insidious and alarming about a 43 year old woman who chooses to wear their daughter’s 4 year old pajamas without a hint of irony?

Was this Bethenny Frankel’s not too subtle way to show us all how marvelously skinny she was, how much better she was than most of us who could never fit into a four year old child’s and perhaps more ominously was the Skinnygirl mogul without realizing it setting a horrible precedent of normalizing ultra thin and starvation (which is what it takes to fit into a 4 year old’s clothes0? And if so why?

Fans immediately set into the former reality star, wondering where she found the gaul to intimidate them into starvation mode, whilst others wondered if this was simply a guise to assert her supposed superiority over other women (look at me, I’m so skinny I can fit into my four year old’s pajamas, aren’t I cool and fabulous?) whilst others wondered if she was suddenly trying to imply by being able to fit into a 4 year old’s pajamas that they too by osmosis could be just as telegenic, famous, successful and desirable as Bethenny. Never mind the fact that grown up ‘healthy’ women aren’t ever supposed to fit into 4 year old’s pajamas in the first place.

Responded the Skinnygirl mogul after the internet proceeded to chase her down the street imploring her to shove some calories down her throat: When ur 4 year old peanut says ‘mommy please put my dress on’ & giggles uncontrollably, u do what ur told.

Which forces one to wonder is this the Skinnygirl mogul’s way of using her daughter to deflect the issue of normalizing ultra thin and unhealthy dispositions whilst at the same time simply ‘appearing funny?’ Or was this just a d listed reality starlet’s desperate attempt to remind us all that she is somehow relevant?

Perhaps aware that she may have transgressed, Frankel went on to tweet the following: Former reality star, failed talk show host & cocktail maven jokes by wearing her kids’ pjs! #itcantbetrue

To date comments on Bethenny Frankel’s post have ranged from “attention whore!” to “you are a terrible role model” to “you have an eating disorder” to ‘this is about competitive weight loss and showing off just how fucking skinny she is,’ whilst others have defended the reality mogul, urging us all to ‘please stop shaming people who are naturally skinny,’ whilst other commentators have bemoaned the world for projecting their insecurities onto others. Which is paradoxically what one could argue is the inspiration behind the reality actresses latest attempt at attention.