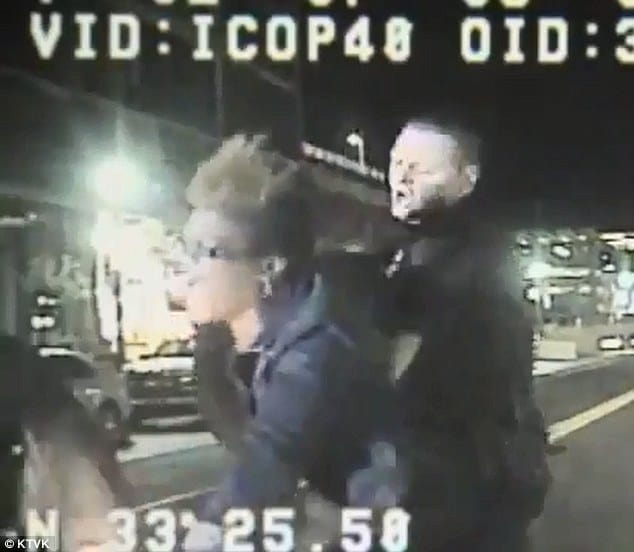 A contentious video has surfaced (see below) showing Arizona State University professor, Dr Ersula Ore being thrown to the ground by police officers after they caught her jaywalking.

An English professor who according to ASU’s website whose research interests include cultural studies, critical race theory, the woman’s arrest came to take place on May 21 on college campus grounds. At the time Dr Ersula Ore was charged with aggravated assault on a police officer in addition to criminal damage, resisting arrest, refusing to provide identification and obstructing a thoroughfare.

According to the woman’s file against authorities, the professor told said she had been walking across the street, trying to avoid construction that was underway up ahead, when a campus police officer stopped her and asked for ID.

At the time Dr Ersual Ore objected to what she deemed ‘disrespectful’ conduct at the hands of the intervening officer after she declined to produce identification.

‘Let me see your ID or you will be arrested for failing to provide ID,‘ the officer can be heard saying in the dash cam footage, which was obtained by KTVK.

‘I have no problem abiding by the law,’ the professor can be heard responding, ‘but all I’m asking, do you have to speak to me in such a disrespectful manner?’

The officer proceeds to explain the law whilst commanding Dr Ersula Ore to put her hands behind her back.

Nevertheless the professor refuses to abide by the officer’s directives, even appearing to fight the officer.

‘Put your hands behind your back right now,’ the officer threatens.

‘I’m going to slam you on this car. Put your hands behind your back.’

‘Don’t talk to me like that,’ Ore says. ‘This entire thing has been about your lack of respect for me.’

After a short scuffle, Dr Ersula Ore can be heard screaming and is thrown to the ground.

Once the officers get up, she kicks one of them.

‘Her dress was up; the officer was reaching toward her anatomy.

‘She felt uncomfortable with hands going there.’

Since the incident, ASU released a statement saying an internal investigation had determined the officers did nothing wrong.

Told the statement: ‘ASU authorities have reviewed the circumstances surrounding the arrest and have found no evidence of inappropriate actions by the ASUPD officers involved,’

‘Should such evidence be discovered, an additional, thorough inquiry will be conducted and appropriate actions taken.

‘Because the underlying criminal charges are pending, there is not much more we can say at this time.’ 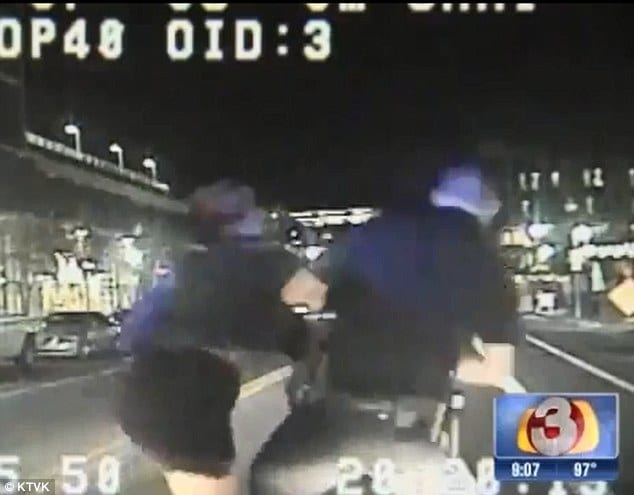 Since the incident, the Arizona Ethnic Studies Network released the following statement questioning authorities, the media’s response and that of ASU itself which has sought to distance itself from the May 21 2014 incident:

We are troubled by the responses of the media, University, and ASU Police Department about this incident. Media versions have presented a sensationalized, one-sided story that differs substantially from Dr. Ore’s and eyewitness accounts. Officials at ASU, in response to questions about the incident and possible racial profiling, have sought to distance the University, stating that 1) because the incident occurred on a public street between parts of campus, it was technically “off campus,” so Dr. Ore was a private citizen; and 2) although they will comply with any investigation, there is no evidence of racial profiling. We find these responses insufficient.

First, the officer involved was an ASU police officer and the University is responsible for the conduct of its employees, including its police force. Second, whether as a private citizen or as a member of the ASU community, Dr. Ore has the right to expect dignified and humane treatment by ASU’s police officers. ASU, as a public institution, has a responsibility to ensure this occurs. Third, ASU has not undertaken a thorough investigation into the matter, so how can officials claim that there is an absence of racial profiling? In a state and metropolitan region in which racial profiling has been proven to be widespread, the ASU administration’s lack of concern for the well-being of an ASU community member of color is unacceptable.

Since the incident commentators on the web have come to wonder if the professor had come to be singled out because of her race or whether she just took her authorities intervention as a personal violation of her rights when in fact they had only sought to do their jobs all the while warning her what would happen if she failed to comply. Reaction from authorities which perhaps ought to raise questions as to how authorities choose to go about affecting the law.

This is just another example of an angry black bitch liberal academic who thinks the laws don’t apply to them.

Funny how at 1:20, you see another pedestrian jaywalking due to the construction just like this Black Professor had done with no reaction by the police.

She wasn’t really refusing to show her ID, she was merely telling the officer that she wanted to be addressed respectfully.

The woman was jay-walking. Struggle, wrestling and violence are absolutely not called for under the circumstances. Again, the cops are out of control and exercising disproportional force.

Her crime was verbal, but the cops were physical. Why are you guys justifying excessive force?