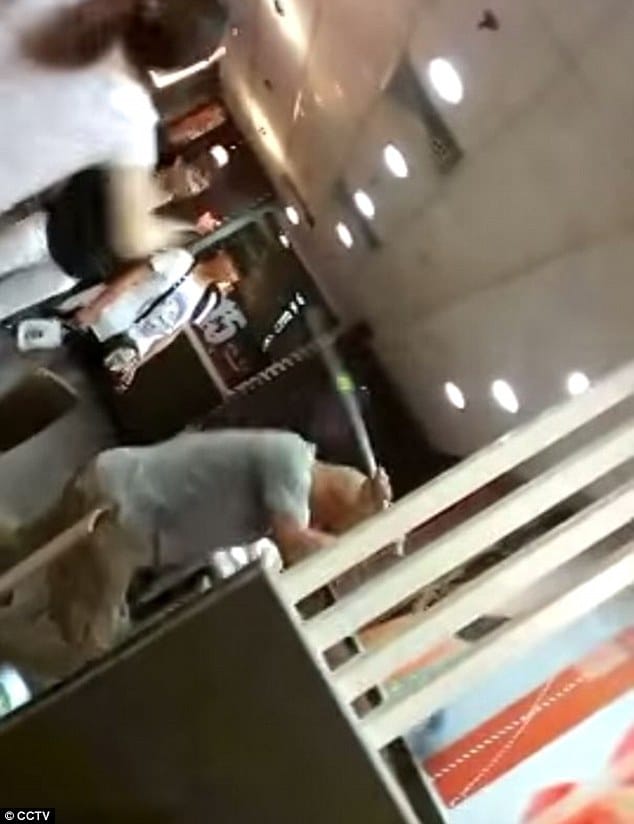 A Chinese woman simply identified as Miss Wu was savagely beaten to death with an iron bar by a group of six cult members at  Zhaoyuan’s McDonald’s in the  Eastern province of  Shandong. The beating which occurred last Wednesday is believed to have come about after the woman declined to give out her number to one of the cult members.

At the time Miss Wu was sitting at the branch eating her meal when she was approached by an individual later identified as Mr Zhang seeking her phone number seeking to enlist her to the cult. Prior to the beating, the man had asked other diners to enlist to the religious cult, ‘All powerful spirit.’

Witnesses would tell, upon declining to offer one of the men her number, the man and woman began to argue, with the man’s fellow cult members, who had come to the fast food eatery with him now joining the fray. Over the course of the next 20 minutes tensions between the group would escalate, culminating in the violent gang like beating of the Chinese woman with an iron bar.

Witnesses would tell during the beating, Mr Zhang’s fellow cult members joined in, kicking the woman in the head as she lay on the ground in a pool of her own blood.

From there the cult members then proceeded to use an iron-handled mop to strike her in the head and continued doing so until the handle broke.

Graphic images and a three-minute clip of the beating have since come to circulating online. 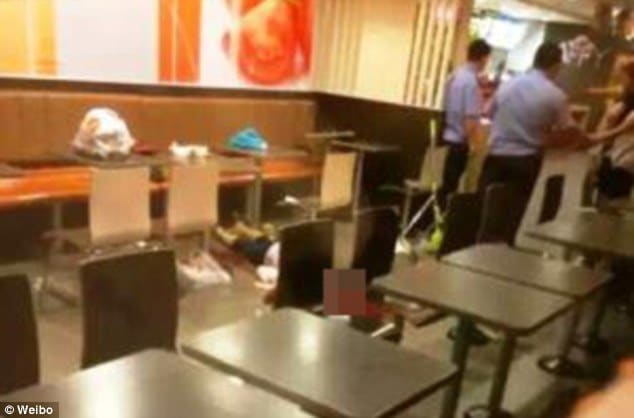 According to ecns.cn, the individual Mr Zhang was purportedly encouraged by a woman shouting ‘beat her to death.’

The accused six would come to be arrested on Saturday with police believing they are part of a religious cult.

Zhaoyuan police have since told that the members, four of which are from the same family, belonged to a group calling itself the ‘All-powerful spirit’ or ‘Almighty God’ and had been collecting numbers in an effort to recruit new people.

Emergency crew confirmed that Miss Wu, who has children, died at the scene which occurred between 9.10pm to 9.30pm.

No one was reported to have tried to help the victim as video footage of the incident caused an uproar as it showed customers watch the woman scream in agony as she was beaten to death.

Police would later tell that Miss Wu was in her 20’s and had children.

In a television news interview, after his capture by the police, Zhang said that he hit Miss Wu ‘because she is a demon, she is an evil spirit’. After her refusal to give them her number, his daughter also chimed in and said that Miss Wu ‘definitely isn’t anyting good.’

Zhaoyuan is in Shandong province, a traditional hotbed for religious cults. The region gave birth to the violent anti-Christian Boxer movement that laid siege to Western interests in Beijing and elsewhere during the waning years of the Qing dynasty in 1900.

China has struggled at times to control grassroots religious movements based on Christian or Buddhist ideology, most notably the Falungong meditation movement that attracted millions of adherents before being brutally repressed in 1999. 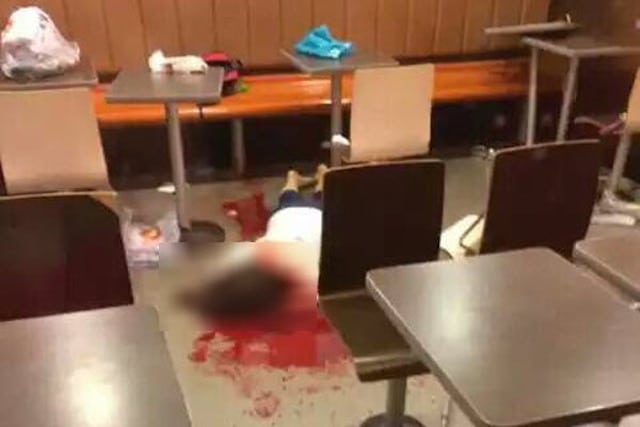 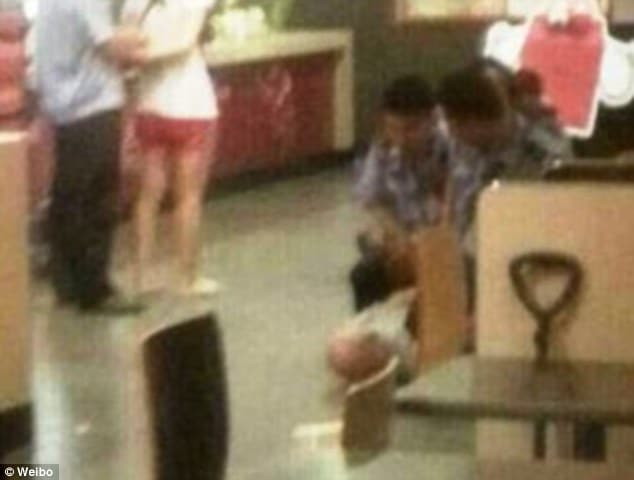 Perhaps ironically, the incident came to take place across the street from a local police station.

State broadcaster CCTV said religious material had been found at a location linked to the sect but gave no further details. A clerk who answered the phone at Zhaoyuan police headquarters said no one was available to comment on the case

In an unrelated incident the Beijing Morning News, said 17 members of the group had been arrested in Beijing in December 2012 for harassing people in a public park with claims that the world was coming to an end.

And then there were there comment on the web that caught my attention:

Let me tell you something, as far as we know, the attackers all believe in a cult called 全能教(Quan Neng Jiao/all-powerful), which is a twist branch of Christianity in China, and these crazy attackers think that it’s powerful and everyone who doesn’t believe it is devil. This CULT is ILLEGAL in CHINA, They asked somebody in MacDonald for their phone number to do missionary, some people gave it to them and the victim refused to give, so the attackers went insane and thought the victim was devil who doesn’t believe 全能教, and then punched the victim, that is why they were screaming “Demon” and “Go to hell“ in the video. It kind of like radical Islam somehow, and it’s very crazy. At least one boy tried to help but failed against 6 attackers so they called the police. Now this is the headline on media in China, the attackers are under arrest, almost every Chinese are paying close attention to this and the attackers have no way to escape sanctions.

Blaming it on a foreign religion instead of the appalling lack of morals in China is a neat way for the entire Chinese society to say “It wasn’t us, everything is fine here with us Chinese. It was fanatical Muslims and Christians who did it”. Talk about the mass evasion of social responsibility. Breathtaking. 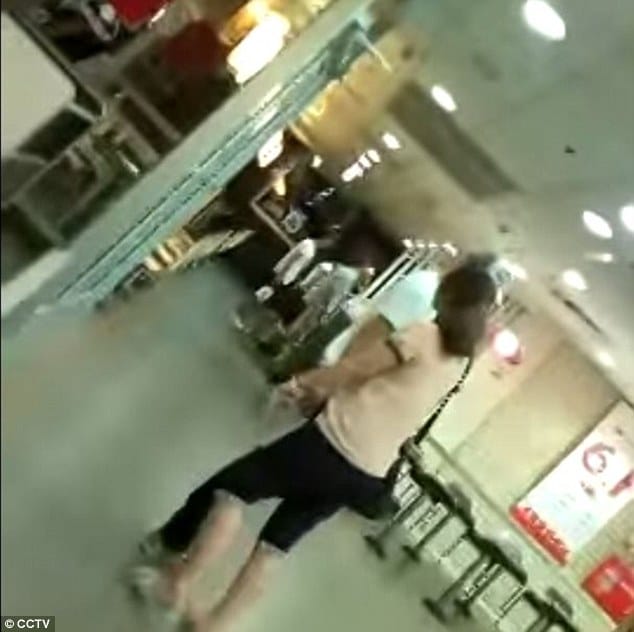 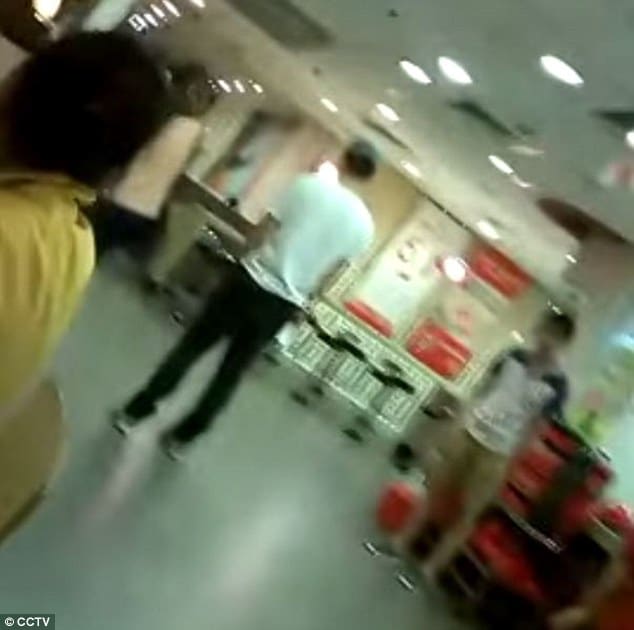