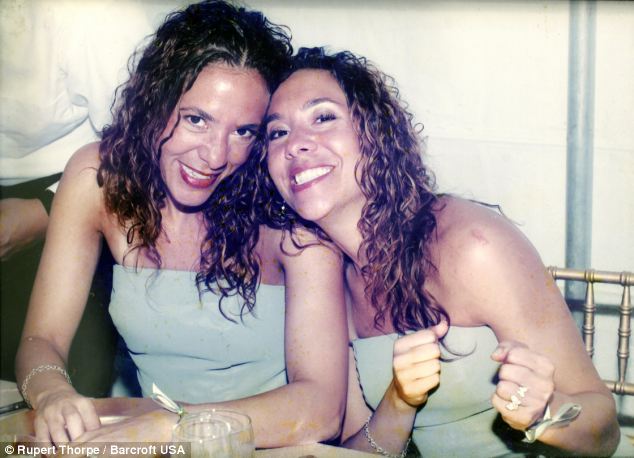 By all admissions, Amy and Becky Glass are obsessive twins, who are so close that the pair haven’t been apart for more than half an hour in 15 years, and even once shared the same boyfriend, not that they don’t already share everything else.

The twins, 46 from Los Angeles tell how they have the same Facebook profile, bedroom, the same mobile phone as well as a business they run together in a shared home office.

The sisters unabashedly go to extremes to be mirror images of each other , from wearing the exact same outfit every day albeit in slightly different colors.

The pair say they are not interested in relationships anymore, in fact telling they feel like they are married to one another.

The sisters tell how have been measuring every bite of food and sip of drink with scales and measuring cups for 19 years, ensuring that their body-shapes and weights stay the same.

Reiterated the sisters in a feature with the UK’s dailymail: ‘It’s really like we’re one person in two bodies.

‘We go bite for bite – and we warn each other when the last bite will be so we know when the other is full.

‘If Becky doesn’t want dessert, I won’t have it . We either talk each other into it or out of it.

‘At one point I weighed a little bit more than Becky, so people would say that I was the bigger twin and we hated it.

‘We decided to go on diets and we have both weighed the same weight ever since.’

The idea of looking identically alike probably comes as a result of  their mother dressed them in identical outfits as the twins were growing up.

In high school they continued to dress alike, but decided to stop when they were bullied for it.

After starting college at Rutgers University in 1986, in New Jersey, they went back to matching because they hated looking different.

Amy said: ‘We felt completely off being in different outfits – I felt like more of myself when I matched my sister, it was natural.

‘But we decided to make a slight twist – choosing to wear the same outfit in two colours.

‘We prefer it so much, because we are the same size, so we can swap clothes.

‘It’s like we get two outfits each every time we shop, because we can mix and match on different days.’

Amy said: ‘We dated at the same time, all three of us – he was always taking both of us out.

‘He was the one guy that both of us had sex with, however, most of the time we took it at the same times.

‘As twins with a connection, we kind of just knew instinctively who was in the mood that night.

‘We never felt jealous of one another, because he would never choose between us.’

Amy and Becky Glass haven’t gone on a date alone in more than 10 years and have ruled out getting married and having children.

Told Amy: ‘We thought about adopting a child and raising it together but we quickly decided against it.

‘We love to travel and it’s just too big of a responsibility.

‘We don’t want to get married because we don’t have to answer to anybody.

Yet it’s when the twins tell how they came to be adopted two months after they being born, and growing up with an adoptive family in New Jersey, USA that one begins to sense the sister’s deep need for unity and sameness and notion of belonging, even if intuitively one wonders there is something ominous and overtly obsessive about their longing….

Reiterates Amy: ‘Our adoptive mom told us how, as babies, we’d climb into each other’s cribs at night because we wanted to be together.

‘We never minded sharing, I would take my pacifier right out of my mouth and share it with Becky.

‘We were actually on top of each other when we were born, with one simultaneous heartbeat – the whole time our mom never knew we she was having twins.

‘We have the same path in life – it’s like we already have a soul mate with each other.’

She added: ‘It’s natural for us and it feels weird if we’re separated or doing things on our own.

The pair even believe they will die at the same time.

Amy said: ‘We say we have a deal with God, he’s taking us both together, at exactly the same time.’