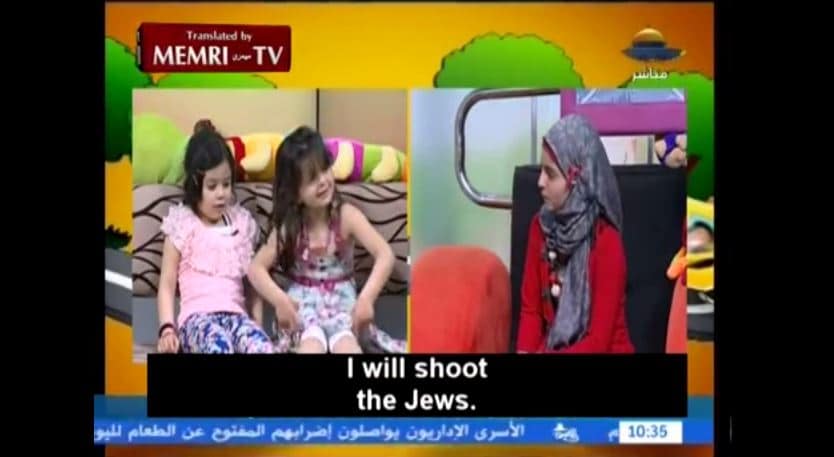 It seems the long seething violence and hatred between Palestinians and Israel is not about to go away anytime soon, this after a children’s show sanctioned by Hamas encouraged children to kill all Jews when they grow up.

In the latest snafu that has disconcerted commentators, the children’s show, ironically titled ‘Pioneers of Tomorrow’ which took place on May 2nd, involves young children being interviewed by a young female presenter and her bumble bee co host (naturally) when at one point the host asks one of the children what she wants to do when they grow up.

The child answers that they want to be a policewoman which elicits the following response from the host, ‘What do the police do?’

‘They catch thieves and troublemakers,‘ chimes in her co-host.

‘And they shoot Jews, right?’ responds the host.

‘Yes,’ the young interviewee smiles to her interviewer’s obvious delight, ‘I will shoot all the Jews!’

Earlier in the segment, which taught children about ‘neighbors’ rights,’ Nahul, an adult in a giant bee costume, told children to take stones and ‘smash’ ‘the Jewish neighbors.’

Hamas is designated by the State Department as a terrorist organization and currently controls the Gaza Strip. Their founding charter calls not only for the destruction of Israel, but also the murder of Jews more broadly.

The show is believed to be widely watched locally as well by international community via satellite.

Told an earlier statement this year courtesy of Israeli officials: ‘The general phenomenon is very clear, they are poisoning Palestinian children with deep hatred of Israel and the Jewish people.’

Israel has long criticized Palestinian television for inciting hatred and violence against Jews. It is not clear what attitude officials direct towards Israeli children towards neighboring Palestinians as the two nations continue to bitterly feud over territories and rights.