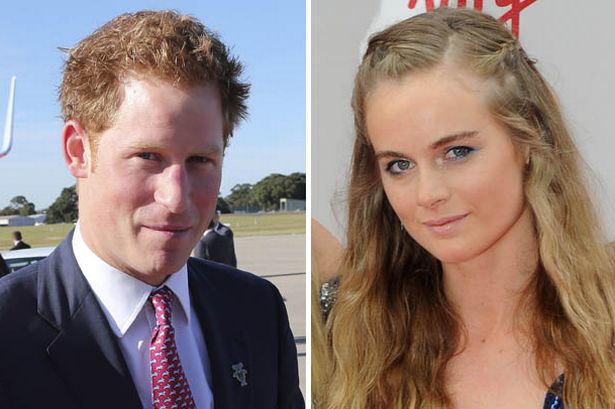 It is now being revealed that the cause of the split between Prince Harry and Cressida Bonas, who had been dating over 2 years had come as a result of a heated argument the pair had this Sunday. The reason- money.

The couple had been due to fly to the US to attend the wedding of the Prince’s friend Guy Pelly on Saturday, but Cresida Bonas had to pay for her own £650 air fare  ($1100 USD) and did not want to spend so much money in light of recent tensions between the pair.

Instead Bonas is said to have confronted Prince Harry about the relationship which resulted in escalated drama (haven’t we all been there kids?) and the pair swearing to go off in their separate ways.

This naturally has led to speculation that Cressida Bonas may regret her decision to split from the royal and seek future reconciliation.

Rumors had begun that the relationship had apparently come under strain in recent weeks, as media sources suggested that Bonas had become too dependent on the Prince and was ‘needy.’

Nevertheless it is believed Cressida Bonas, 25, is said to have been unhappy for some time, partly because of the strain of being in the public eye and partly because the dance graduate was feeling ‘frustrated and unfulfilled’ at her inability to pursue a career on the stage while dating the royal.

Prince Harry will now fly to Mr Pelly’s wedding without Miss Bonas, accompanied by his brother the Duke of Cambridge, who could use the flight to Memphis to offer some advice after his experience of temporarily ending his relationship with the then Kate Middleton in 2007.

Pursuant to the split, Cressida Bonas was seen trudging off to work the next day, her hands in her pockets trying very hard to avoid the paparazzi.

Told a friend: ‘Cressida was due to go to the wedding but she was paying for her own ticket, and she could only just afford it. She has never complained about paying her own way, though she has been hard pushed to do so,’

‘The widespread opinion that she is a wealthy heiress is complete rubbish, so it was quite a stretch to go to Guy Pelly’s wedding. Guy is not a close friend of hers so there would have been no point in going if she and Harry were splitting up.’

‘Cressida Bonas, who earns around £20,000 and prefers not to rely on financial support from her parents, does not have the sort of money at her disposal to keep up with her boyfriend,’ reiterated the friend told.

Adding: ‘The media has frequently commented on her dress style but it’s very difficult to turn up at so many occasions when you are expected to wear something different each time.’

Friends made clear that while the timing of the row may have been prompted by the imminent trip to the US, the row itself was not about the air fare, but was about the couple’s long-term future and Bonas’s increasing unhappiness.

Miss Bonas, who studied dance at Leeds University and at the Laban Conservatoire in London, has never been able to reconcile the knowledge that she would have to choose between Prince Harry and her aspirations of a career on the stage.