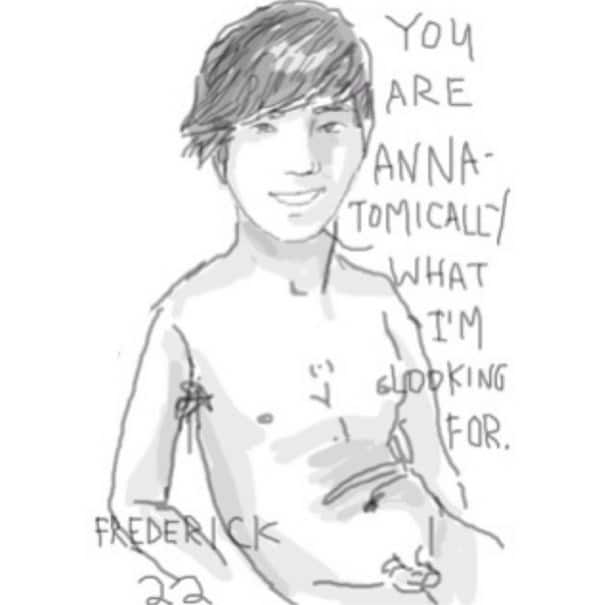 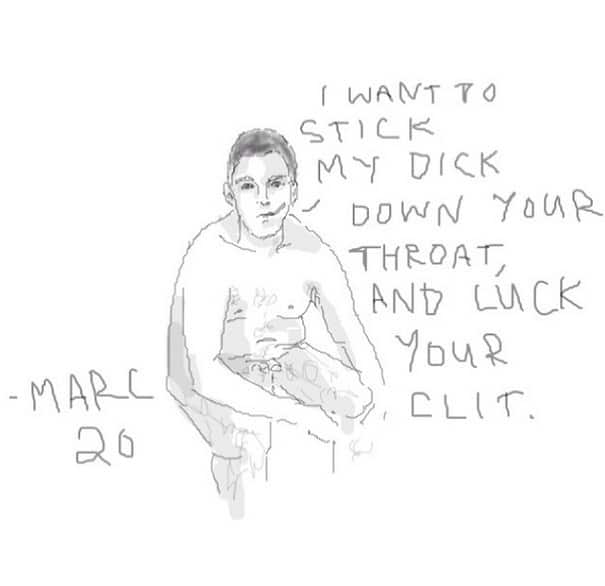 When artist Anna Gensler first got on dating app tinder six months ago she probably anticipated a sly of romance, but that it seems is the furthest thing she got as she came to find herself over the coming months being sexually harassed by mobile suitors who were looking for some hot ‘fucking’ action then and there.

But lo this is tinder where you’re allowed to be irresponsible, a fool and bereft of savvy. Until that is you meet someone like Anna Gensler.

The initial onslaught of messages directed at Gensler included the following:

Told another: ‘If I was a watermelon, would you spit or swallow my seeds,’ 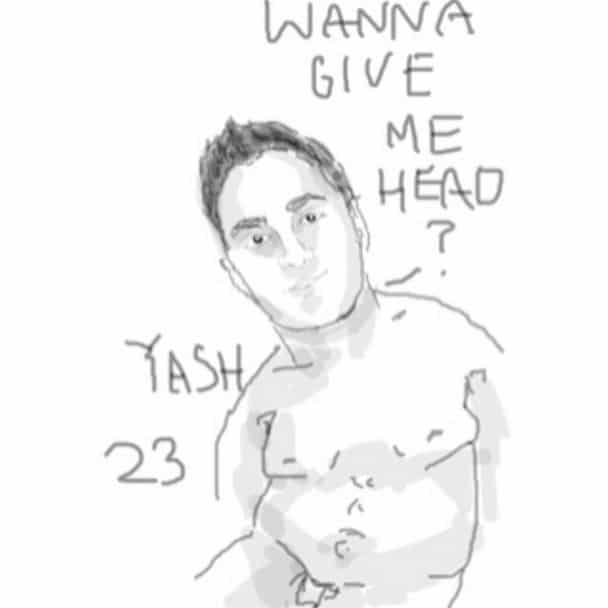 And here came the retaliation:

via slate: Gensler, an artist, was not charmed by their opening lines. In retaliation, she began drawing nude portraits of these online creeps, posting the results to Instagram next to their offensive messages, and then sending the final product back to the perpetrators for review.

What follows is an intriguing q and a with slate where Anna Gensler is asked why she chose to out her harrasers, portray them with small flaccid penises and how she came to learn that unfortunately on the internet decency and sensitivity go out by the window.

Asked if she thinks her drawings have deterred future creeps, the artist answers:

‘… feel like the guys who are really creepy don’t even bother to read my profile at all. They’re just like, “This girl has two arms and two legs.”

Asked how the men who are portrayed responded to her drawings, Gensler offers:

‘Some of them get really angry and say a bunch of mean stuff. Some of them get a little bit offended and say, “Why am I so fat? My facial hair doesn’t really look like that. My nipples are smaller than that!” They think I didn’t do them justice. Some people just block me. But a couple of guys have actually said smart things after I sent it to them. But if you’re smart and seem like a normal person, why are you using opening lines like “I love butt sex”?

Granted one is prone to wonder what Anna Gensler was expecting on a hook up site, then again it’s one thing to accept degenerative come ons (as if somehow that’s the acceptable and norm) and all together another thing when the female turns around and objectifies her suitors, which interestingly only then becomes media fodder…. 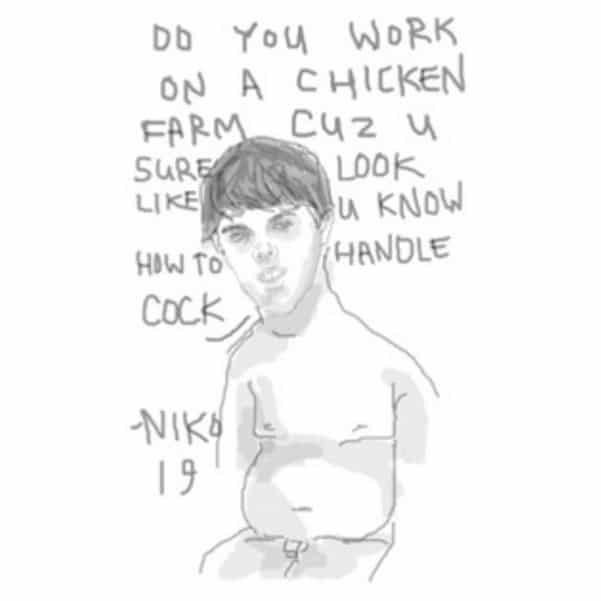 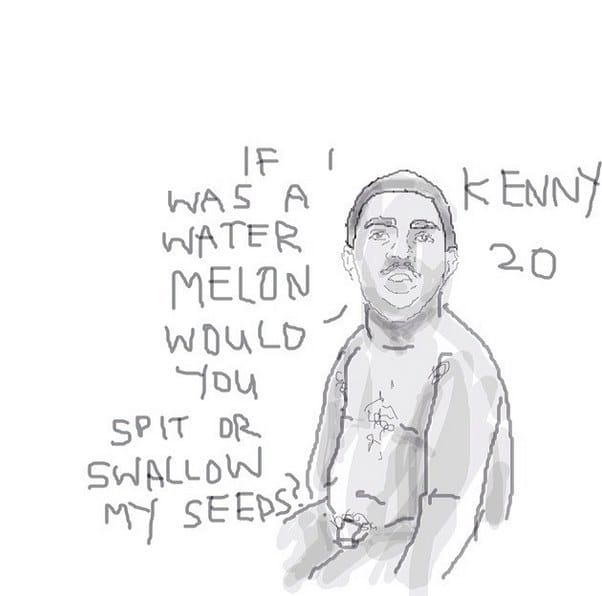 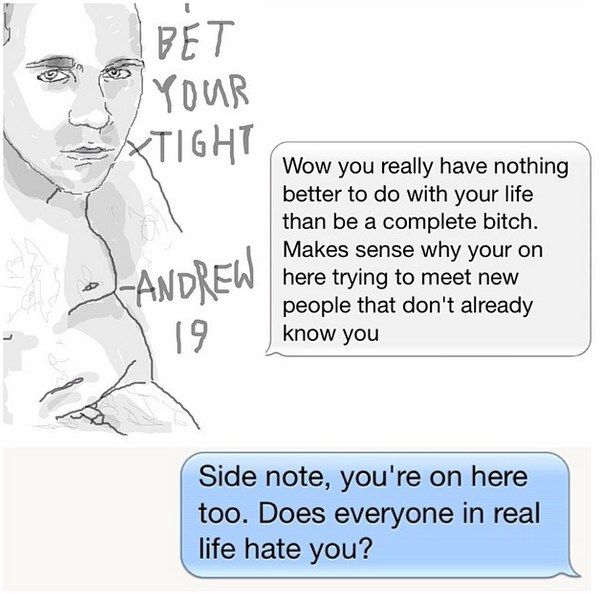 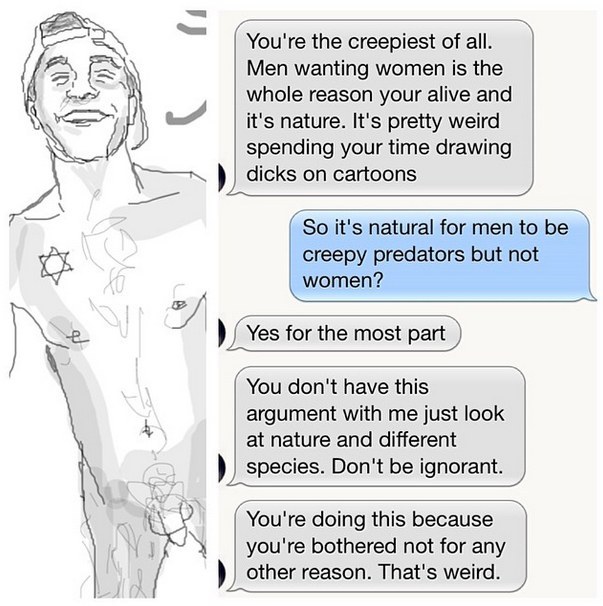 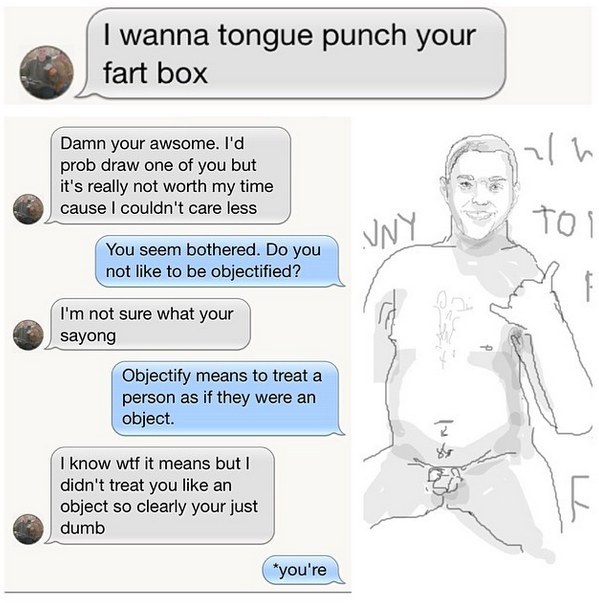