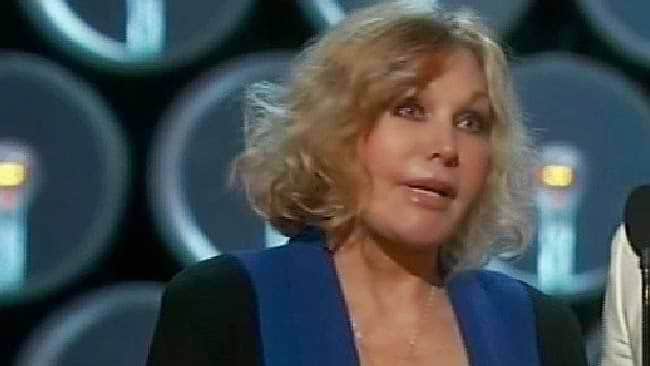 Kim Novak plastic surgery face is the mask we are all wearing….

It’s moments when a former Hollywood icon takes to the stage that the nations gut can be heard wrenching. Such was the case when former ingenue Kim Novak of the 50’s joined Oscar award winner for best actor 2014, Matthew McConaughey last night to present an award.

To be blunt she sounded frozen and looked the part as well. It was a grotesque manifestation of what once used to be one of the world’s most beautiful women and adulated talent. Yet something happened. Kim Novak might not see it that way, but we the audience, we her fans see it that way. The way twitter saw her… 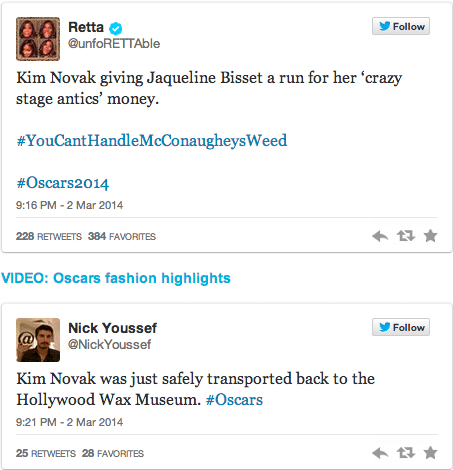 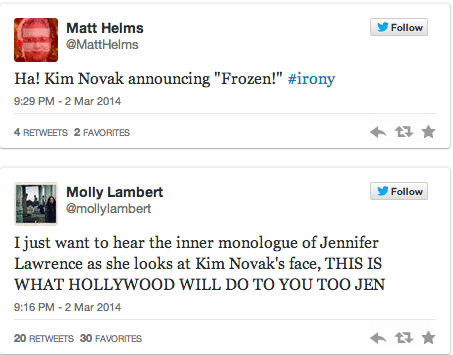 With copious plastic surgery that has gone haywire wrong one could only ask had Kim Novak become victim of her own fame and former glory as she set about via artificial means to retain that which made her an adulated heroine. It’s a sad testament to Hollywood that a former beauty can become so grotesquely disfigured for the sake of vanity and idealization. What is it about Hollywood and our collective lust for beauty and youth that sometimes and unfortunately so often the object of our fascination becomes the disdain of our memories?

At least Kim Novak will remain in spirit and body for us, as her fans, but one does wonder when will the day come when we can leave our screen idols to rest in peace and dare to age gracefully rather than taking to absurd and dehumanizing acts for the sake of vanity.

What is it about Hollywood and the entertainment industry that forces such absurd approximations on women? And why oh can’t we all just accept our mortality for the sake of our immortality ….?