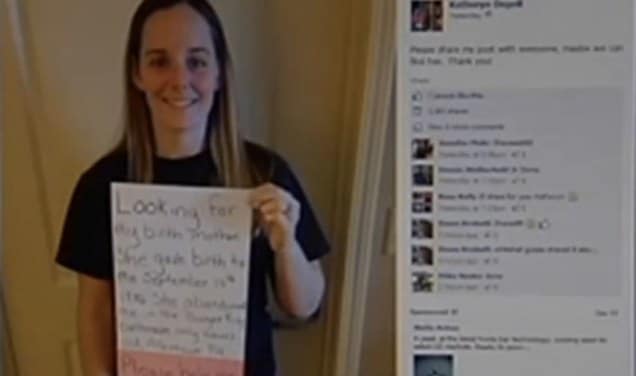 Katheryn Deprill a 27 year old woman who was abandoned in a Burger King bathroom as a newborn has at last been reunited with her birth mother.

The woman who has since become known as the Burger King baby set out to find her birth mother via Facebook after having initially placed the following plea less than a month ago:

‘I want her to know that I am not mad at her for what she did, however I have so many questions to ask her and also to start a relationship with my biological mother.’

‘Please help me find her by sharing my post,’she added. ‘Maybe she will see this.’

As fate would have it (and 30 000 reposts later), Katheryn Deprill’s birth mother did see the post and the pair were reunited Monday amongst tears.

An attorney representing the Burger King baby’s birth mother, Jim Waldron helped arrange the meeting, telling the mother was only 17 when she left the newborn in an Allentown, PA Burger King bathroom.

The mother disclosed that she had been raped whilst traveling abroad and knew she couldn’t take care of a child. The lawyer further told that their client acted before her parents could find out she was pregnant.

Reiterated the lawyer: ‘She left the baby in a location where the baby would be found and cared for,’ the attorney said. ‘She kissed the baby on the forehead … and left.’

Katheryn Deprill, a married mother of three told she was ‘super excited’ to meet her biological mother.

Told the 27 year old: ‘She left me somewhere she knew I’d be found. She did not want to throw me away.’

As for Deprill’s goal of starting a relationship with her mother, gawker tells that it looks likely to happen. Her mom wants to be involved in her life, and they’re making plans to meet up again.

The reunion was also attended by Katheryn Deprill’s adoptive mom and her birth mom’s husband.