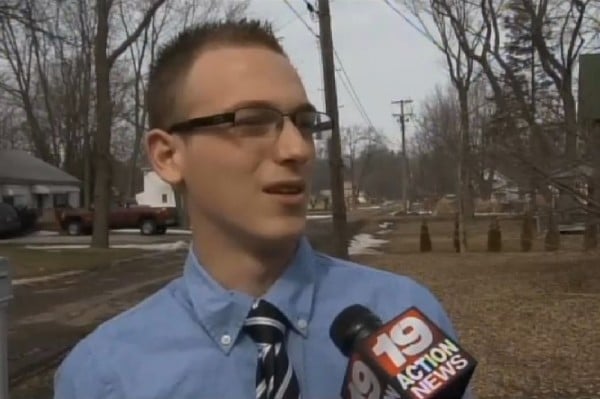 Jordan Wiser an eighteen year old student enrolled in an Ohio vocational-technical school recently found himself serving 13 days in jail for the crime of stashing a pocket knife in his car. Since his arrest and incarceration, his aspirations to pursue a career within enforcement and the army have been sent dashing.

Explains the blaze: It all started Dec. 12 when administrators at Ashtabula County Technical and Career Campus (A-Tech) in Jefferson, Ohio — about 60 miles northeast of Cleveland — questioned Wiser after an alleged tip regarding videos uploaded to Wiser’s YouTube account. Among the clips are reviews of video games and merchandise, home defense tactics, and an interview with a local police officer.

Told Jordan Wiser to huffpo: ‘The principal said he had reason to believe I had weapons in my vehicle and needed to search it,’

‘He made me empty out all my pockets, and the vice principal grabbed me and patted me down very forcibly. It was somewhat awkward. Then they took my car keys. I told them what was in my car and said, ‘Don’t be alarmed.’’

From there Wiser tells that he didn’t give school officials permission to search his vehicle, nor was there a warrant to perform the search. Nevertheless school officials cited the school handbook as their warrant, denying his request to call an attorney.

Officials would come to find a folding blade pocketknife, a stun gun and two Airsoft guns.

Asked about the Airsoft guns Wiser told he had plans to play Airsoft (a game akin to paintball in which participants shoot each other with round non-metallic pellets) after school.

The stun gun he told was for self-defense, whilst the pocketknife was part of his EMT kit.

Told Jordan Wiser to huffpo: ‘My stun gun was locked in the glove box and the knife was in my EMT medical vest. I bought it at K-Mart and have it as part of my first responder kit for cutting seatbelts.’

Wiser was arrested and jailed for illegal conveyance of a weapon onto a school ground, a Class 5 felony.

Harold Specht, the chief assistant prosecutor at the Ashtabula County prosecutor’s office, said the charge was related only to the pocketknife.

Told Jordan Wiser: ‘I was in jail for almost 13 days,’

‘The first bond hearing I went to was on December 15. The judge ordered me [to be] held on a half million-dollar bond, pending a psychological evaluation. I did that and passed. They found I was not suicidal, homicidal or a threat to anybody. My attorney brought it up in front of a different judge, who let me out on a $50,000 bond and an ankle monitor. I was released from jail on Christmas Eve.’

Asked to reflect on why the discovery of his pocketknife led to the upheaval that it did, Wiser offered: ‘There are kids at my school all the time who get caught with knives and are suspended,’

‘My school is very rural, and people carry knives. I can accept the fact that there was a lapse in judgment, and I can accept a punishment, but I have already been expelled from both the tech school and my home school.’

Declining to discuss the case is Jerome Brockway, the A-Tech superintendent as the charges have since lent some harsh consequences to the youth.

Since Jordan Wiser’s felony charge, he said the Army discharged him pending a not-guilty verdict or dropped charges without prejudice.

But that’s part of the case. Wiser tells if the felony charge sticks, things could get way worse.

Soon after a petition on change.org was created demanding Wiser’s charges be reduced to a misdemeanor, and within 48 hours, it attracted 1,349 signatures. But Wiser said he asked that the petition be closed, which it was.

Tells Wiser: ‘The court threatened to hold sanctions against me and my lawyer,’

‘I guess the prosecutor was upset because his inbox had been flooded with emails as a result of the petition.’

Harold Specht, the chief assistant prosecutor has told that he’s aware ‘there’s a load of people out here that just think we’re the devil because we’re allegedly ruining this young kid’s life,’ but he insisted that’s not the case and that the felony charge is justified and there are no plans to reduce the charge.

‘There are all these school occurrences where people are shot, people are killed by other students,’ Specht told. ‘We see it every day … so we don’t take these things lightly. … We have to be sure that we don’t have a potential for something like that to happen here.’

Rebutted Jordan Wiser: ‘I was enlisted in the Army and went to school to be [a] police officer and fireman,’

‘Why are they trying to paint me as a potential school shooter? I never had any intentions of hurting a soul.’

Wiser is scheduled to appear in court again on April 1 for a pretrial hearing. A jury trial is tentatively scheduled for June 11.

‘Never in my life did I think this would happen,’ Wiser adds. ‘I dedicated my life to public service, and now a four-inch pocketknife could ruin everything.’