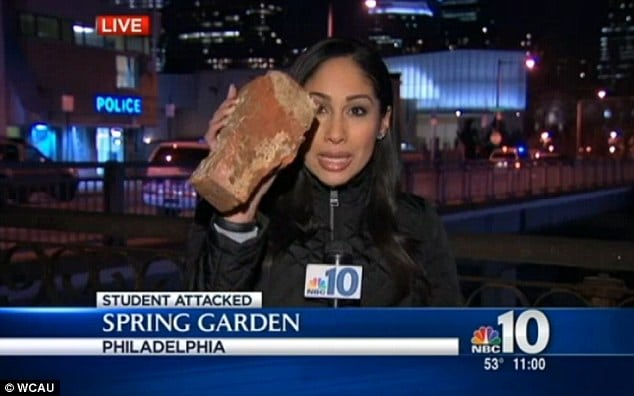 A 19 year old female Temple University student is vowing to return to class despite a savage beating she received Friday night from a pack of children who used a brick to smash her face in.

The unnamed student who to date is still struggling to even eat soft foods was walking along with her boyfriend (also a Temple University student) just off campus grounds when she was harangued by up to ten children.

The couple were followed for a block in the inner city enclave of Philadelphia until the vicious assault left the female student with dislocated teeth and a fractured jaw.

Told the defiant student: ‘I’m definitely going to go back to class,’

The children are said to have ranged from the ages of eight to 14 years old and are believed to be made up of minority race.

Recalled the female student: ‘I’m walking by and one of the people from the group screamed at me, really loud and really close to my face,’

‘I kept walking because I don’t want to engage them.’

The group at first only taunted the pair, but things escalated within a matter of minutes.

One girl then punched her in the face, she continued, but that was only the beginning.

‘A couple of them started to grab at her earrings and her hair,’ he said. ‘My instinct was to stop them from hurting us and leave and get away.’

Told the girl after being struck in the face and having her jaw dislocated: ‘I tried to get away as fast as I could,’

‘My teeth were halfway out of my mouth. I wasn’t thinking about anything besides getting to safety.’

The girl was rushed to the hospital and underwent hours of emergency surgery to both save and align them.

Told the girl’s father: ‘All of her teeth were pushed into the back of her mouth,’

‘Her five top, front teeth were bent all the way back from the gum.’

Neither the Philadelphia nor the Temple University Police Departments have any solid leads towards tracking down the girl’s attackers.