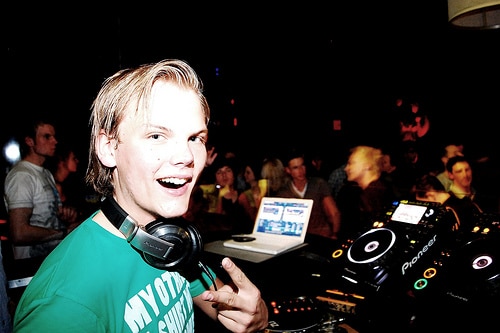 DJ Avicii has at the last minute canceled for tonight’s performance at Miami’s Ultra Music festival prompting questions as to why the famed Swedish dj has once again called out sick. Many are beginning to think he has a serious drinking problem…

Writes miamiherald: Superstar DJ Avicii was hospitalized in Miami Thursday afternoon with severe abdominal pain, nausea and fever from a blocked gall bladder, and has canceled his headlining performance Saturday night at the Ultra Music Festival in downtown Miami as well as all other appearances this week, his management said late Friday afternoon.

Dj Avicii apologized to fans on his Facebook page Friday evening: ‘I’m very sad to inform everyone that i, due to hospitalization, need to cancel my set on Ultra Miami this Saturday. Deadmau5 is being kind enough to step up and I’m very sorry to let everyone down. Much love.’

‘My doctors have decided to operate and remove my gall bladder tomorrow morning. It’s a routine procedure and all going well, I expect to be fully recovered and back on my feet in time for my US True Tour.’

The news came after 24 hours of rumors and headlines when the artist behind Wake Me Up and other EDM megahits canceled a Thursday night show at the SLS South Beach hotel, to which he’d lent his name for a high profile branding partnership and series of glitzy events.

DJ Avicii, real name Tim Bergling has been treated twice before for serious health problems brought on by his rapid rise to the top of a music scene known for its intensive pace and indulgent lifestyle. In interviews with website In The Mix, and with Rolling Stone and GQ, Avicii admitted that excessive partying and all day binge drinking, on top of a heavy touring schedule of over 300 shows a year, put him in a New York hospital with acute pancreatitis for 11 days in late 2012. A common cause of pancreatitis is alcohol abuse.

Last March he was again hospitalized in Australia for six days for the same condition, forcing him to cancel shows there and a tour in India soon afterward.

Told ominously DJ Avicii to GQ: ‘You are traveling around, you live in a suitcase, you get to this place, there’s free alcohol everywhere—it’s sort of weird if you don’t drink,’

‘I didn’t expect it to last… I was so nervous. I just got into a habit, because you rely on that encouragement and self-confidence you get from alcohol, and then you get dependent on it.’

In January he told Rolling Stone that he has not had a drink in a year. But news stories on the Australia incident reported that Avicii opted out of recommended gall bladder surgery in order to go ahead with his many gigs. Prompting questions as to how serious the 24 year old star’s drinking problems are and whether he will be able to get a handle of things or whether this ‘brand’ of partying is endemic to the industry?

TMZ have since informed that DJ Avicii’s pancreas surgery went fine without a hitch.