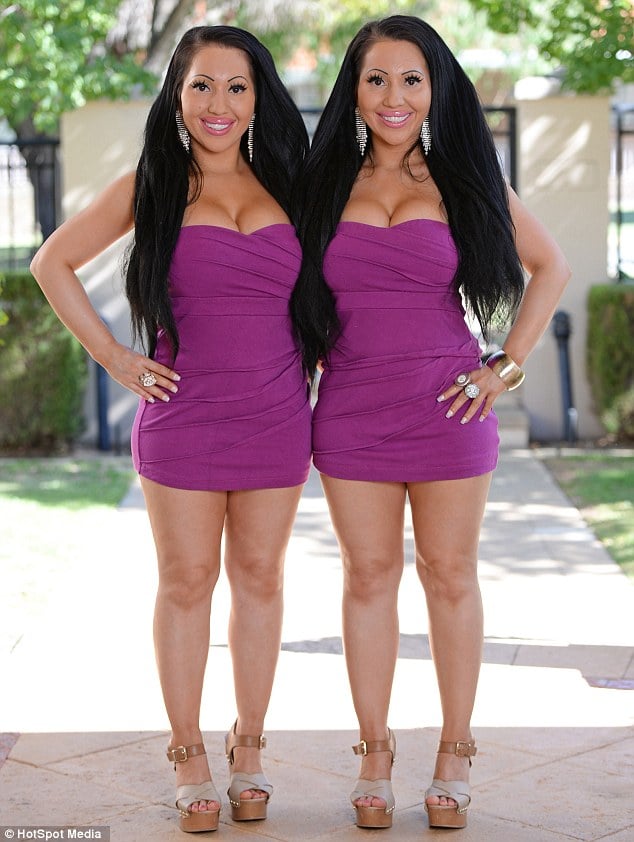 Out of Perth, Australia comes the remarkable tale of twin sisters, Anna and Lucy DeCinque, 28 who have spent upwards of $240K AUD ($220K USD) in an effort to erase any differences between them along with sharing just about everything else in their lives, from job, car, Facebook account and of course the same boyfriend.

The sisters tell to date they have had identical procedures including lip fillers, breast implants and fake eyebrows and eyelashes.

But that’s not all. The siblings also spend every waking moment together – and every sleeping moment too, as they share a bed.

Anna and Lucy, who live at home with their mother, also share a boyfriend, which they believe is a perfect situation for a relationship. Though the two have had separate love interests before, they have always been brothers, or at least best friends.

Their current boyfriend is electrical mechanic Ben Byrne, also from Perth, according to PerthNow.

Told sister Anna DeCinque: ‘We’re dating one boy at the moment. There are three people in our relationship. We’re sharing.’

Reiterated twin Lucy: ‘It’s not really weird to us. We have one boyfriend and all three of us share the same bed. For guys, in their hearts and dreams, they want two girlfriends.

‘We have the same taste in everything, so obviously we’re going to like the same boy too. We’re all together when we have sex, and if we like the same guy, so be it. Every date had to be a double date. It’s always double or nothing.’

From an early age the sisters tell they were inseparable. From attending the same nursery, primary and secondary schools, before enrolling on a beauty course together.

The sisters revealed that they were so close even their parents have struggled to tell them apart, especially their father Luigi, who died in 2010.

Lucy said: ‘Our mum has always been able to tell us apart. But, our dad, not so much. He would say, “Which one are you?”‘

Only a small mole on Lucy’s cheek and a scar on Anna’s forehead separate the two. But, those slight differences go unseen by most – including ex-boyfriends.

Told Lucy: ‘We’ve had fun, especially when we were younger. We would swap boyfriends, if we were bored.

‘Like, even on the telephone, if I didn’t want to talk to my boyfriend, Anna would take the phone and pretend to be me. We would play games like that, and the other person never realised.

‘We’ve settled down a bit now.’

The childhood accident – a bump in the bathroom – that caused Anna’s scar is one of the few things the sisters didn’t do together.

Since then, everything Anna and Lucy have done has been in sync. From living together, to the job they share – working with the elderly – the twins are never more than a few feet away from each other at all times.

‘We never get tired of each other, even though we’re always together,’ said Lucy.

‘Of course, we argue. When you’re with someone 24/7 you’re going to have arguments and get on each other’s nerves. We always make up, though.’

Anna and Lucy’s unique bond has only grown as they got older. Aged 12, the sisters opted for different hair styles, with Anna going for a longer cut, but the streak of individuality was short-lived.

When their father Luigi was diagnosed with cancer and remained housebound, the girls became even closer. They quit their beauty course and stayed at home to look after their dad, until his death four years ago.

That same year, when the girls turned 24, they both decided to have breast enlargements after, inspired by Kim Kardashian‘s. The two from a BB cup size to DD.

Once a week, Anna and Lucy take advantage of infrared saunas, microdermabrasion and skin peels to maintain the mirror image. They also follow the same exercise routine and keep an identical diet.

Anna said: ‘We like looking after ourselves, what girl doesn’t?’

The sisters, who don’t drink or smoke, take great pride in their appearances, and wear a new outfit every Saturday night.

Their wardrobe is full of body-hugging size 8 mini-dresses and chunky heels.

Lucy said: ‘We never wear the same outfit twice when we go out. Everything has to be new. When we go clothes shopping, Anna will already know that I like a certain top.’

We always know what the other is thinking,’ Anna added. ‘We stopped buying gifts for each other, because we ended up buying each other same thing.

After caring for their father while he was ill, Lucy and Anna applied for a job in aged care, serving meals to the elderly.

Their joint application was successful and they job share the position and take home one salary.

The money, which ends up in the same handbag – carried by Lucy, goes towards the twins’ beauty regime.

And, when the twins step out of the sauna and walk down the street, attention is never far away.

‘And we always have girls coming up and saying “where do you get your clothes from?” They love our style.

‘And we feel each others’ pain too. If Lucy’s at the dentist, I will feel her pain.’

While the girls have been warned that their extreme closeness could lead to serious problems in the future, especially if one of them decides to get married and move away or if one of them dies, the twins remain unfazed.

Lucy says, ‘We can’t imagine a day when we’re not in each others’ company. And, to be honest, I don’t think that would ever happen.’

I have an identical twin sister , people struggle to tell us apart but we are two individuals who happen to look the same and we are very close but c’mon sharing our husbands … Sick or perverted?????

While I am all about living your life the best way you know how and to just do what makes you happy…I have to say they are coming off as having some kind of syndrome or abnormality. People like this don’t realize they are actually destroying their face with plastic surgery…like MJ and Bruce Jenner. This is a real sickness. They may be sweet girls, but if I had to sit in a room more than 10 minutes and hear them complete each others air-headed sentences, I think I’d rather shoot myself in the ear.
SHARE
Facebook
Twitter