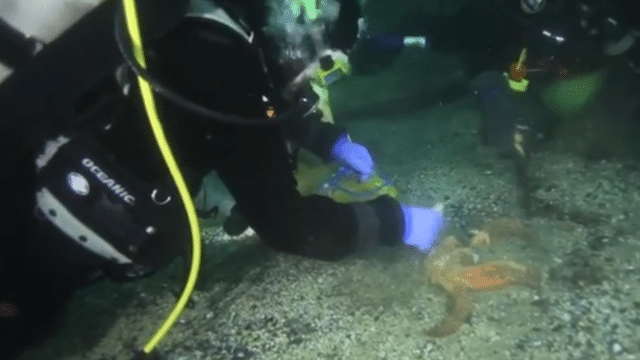 Marine biologists are at a loss to explain the mysterious washing up of starfish on the US west coast in recent months.

Scientists first started noticing the mass deaths in June 2013 and since then only more starfish have landed on the shores.

Tells gawker: Tens of thousands of starfish in the Pacific are dying from a mysterious illness that causes their arms to walk away from them until they rip out.

Scientists say about a dozen different species of starfish are afflicted with the disease, which they’re calling “sea star wasting syndrome.” Cases have been reported on both the east and west coasts.

Sick starfish develop lesions on their bodies and begin to twist their arms into knots. The arms then crawl in opposite directions until they rip off. The starfish are unable to regenerate new limbs and die within 24 hours.

And yet scientists can not explain why this is all has come to pass, nevertheless one is certain, our fragile ecosystem may have been ruptured and we are now seeing it manifest in the most original and daunting facets.

Previous cases were believed to be associated with warmer waters — sea stars have sensitive skin and prefer cooler water — but this was not the case in 2013.

And when the die-offs happened previously, the geographic span of the infections was much smaller, and far fewer sea stars were affected.

One prevailing theory making the rounds is that a boat carried a pathogen from the other side of the world setting of a violent chain reaction. But how something mundane or seemingly inconsequential could have had such an intense effect on the ecosystem has yet to be understood. That said one thing for certain is that scientists have detected a bevy of hotspots that all link up to the major shipping routes, which is to infer man’s participation with nature has once again caused a fissure with our delicate ecosystem.

And while you may think starfish arriving on en masse on the shores is of no consequence think again:

Sea stars are voracious predators, like lions on the seafloor. They gobble up mussels, clams, sea cucumbers, crab and even other starfish. That’s why they’re called a keystone species, meaning they have a disproportionate impact on an ecosystem, shaping the biodiversity of the seascape.

When sea stars decline in number, ‘the mussel population has the potential to dramatically increase, which could significantly alter the rocky intertidal zone,’ according to Jonathan Sleeman, director of the US Geological Survey’s National Wildlife Health Center.

While sea stars make up an important component of the base of the ocean food chain and are considered a top predator, they are in turn eaten by other starfish, shorebirds, gulls, and sometimes sea otters. Which is to say if the health of our oceans are at stake, eventually the health of the human species who rely on land, sea and air to stay alive will also come to be affected as well.

Researchers who are studying the instance are asking beach-walkers to photograph any starfish they see to tweet photos of it with the #sickstarfish tag.