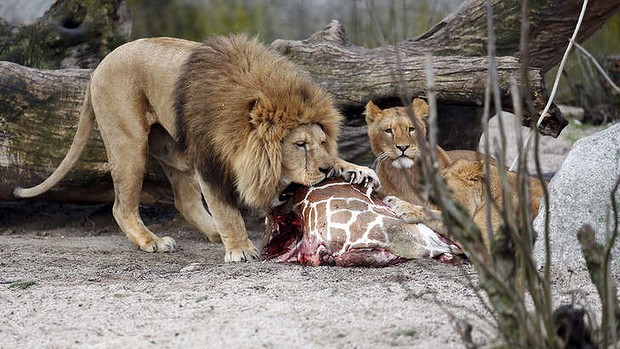 Animal lovers the world over have expressed indignation and dismay over Copenhagen Zoo‘s decision over the weekend to put Marius the giraffe to death and fed to the lions. The decision told zoo keepers was that they feared inbreeding.

Preceding the 18 month old giraffe’s butchering, 33K individuals had signed an online petition, ‘Save Marius’ pleading with the Copenhagen zoo to spare the giraffe’s life, with even one Los Angeles billionaire offering to buy the doomed giraffe and house it at a Beverly Hills garden.

To boot, another zoo, in the UK had offered at the last minute to take the animal off the zoo’s hands but officials rejected the offer because Marius’ older brother lived and the park’s space could be better used by a ‘genetically more valuable giraffe.’

Copenhagen Zoo also turned down an offer from a zoo in northern Sweden, because of the zoo’s failure to follow tough stringent protocol as mandated by a pact called European Association of Zoos and Aquaria (EAZA) that is followed by a select few zoos in Europe in which the Copenhagen Zoo was a part of.

The Amsterdam-based EAZA has 347 members, including many large zoos in European capitals, and aims to conserve global biodiversity and achieve the highest standards of care and breeding for animals.

EAZA membership is not mandatory, but ‘most responsible zoos‘ told spokesperson Tobias Stenbaek Bro ‘were members of the organization.’

The EAZA pact had also been pointed to when asked as to why the zoo had simply not sold the doomed giraffe off to an American buyer, with Copenhagen zoo officials once again pointing to the he American entity’s non inclusion in EAZA.

Incredulously Marius the giraffe would go on to be killed in front of large crowds of onlookers, including children who then watched zookeepers chopped the animal up all the while explaining the animal’s body parts before setting its carcass to a waiting brood of nearby lions.

Told Tobias Stenbaek Bro: ‘It was put down at 9.20. It went as planned. It’s always the people’s right to protest. But of course we have been surprised.’

Bro told some zoo staff had received death threats including scientific director Bengt Holst who ‘received a call in the middle of the night.’

In response to claims as to why the zoo chose to kill the animal in front of children (it was shot in the head whilst called over and offered a piece of bread) and then sliced up, the zoo told that it had decided to allow parents to decide whether their children should watch the zoo perform what it regarded an important display of knowledge about animals.

Offered Bro: ‘I’m actually proud because I think we have given children a huge understanding of the anatomy of a giraffe that they wouldn’t have had from watching a giraffe in a photo.’

He said the zoo, which now had seven giraffes left, followed the recommendation of the European Association of Zoos and Aquaria (EAZA) to put down Marius because there were already a lot of giraffes with similar genes in the organization’s breeding program.

In a statement on its website, the zoo said that under EAZA rules, inbreeding between giraffes was to be avoided

He also said it was important for the breeding programs to work.

The zoo said it had no choice other than to prevent the animal from attaining adulthood, stating that castration was considered cruel with “undesirable effects” and there was no program to release giraffes into the wild.

Copenhagen Zoo does not give giraffes contraceptives or castrate them because that could have unwanted side effects on their internal organs, and the zoo regards parental care as important, Holst said.

EAZA said it supported the zoo’s decision to ‘humanely put the animal down and believes strongly in the need for genetic and demographic management within animals in human care.’

However, the organization Animal Rights Sweden said the case highlights what it believes zoos do to animals regularly.

‘It is no secret that animals are killed when there is no longer space, or if the animals don’t have genes that are interesting enough,’ it said in a statement. ‘The only way to stop this is to not visit zoos.’

‘When the cute animal babies that attract visitors grow up, they are not as interesting any more,’ it said.

Elisa Allen, spokeswoman for People for the Ethical Treatment of Animals in Britain, said Marius’ case should serve as a wake-up call for anyone who ‘still harbors the illusion that zoos serve any purpose beyond incarcerating intelligent animals for profit.’

She said in a statement, ‘Giraffes rarely die of old age in captivity, and had Marius not been euthanized today, he would have lived out his short life as a living exhibit, stranded in a cold climate, thousands of miles away from his true home.’

Stine Jensen, from Denmark’s Organisation Against the Suffering of Animals, said the situation ‘should not have occurred.’

‘Here we have a zoo which thinks that putting this giraffe down instead of thinking of alternatives is the best option,’ she said.

And then there was this response from Copenhagen Zoo’s scientific director Bengt Holst: ‘I know the giraffe is a nice looking animal, but I don’t think there would have been such an outrage if it had been an antelope, and I don’t think anyone would have lifted an eyebrow if it was a pig.’ 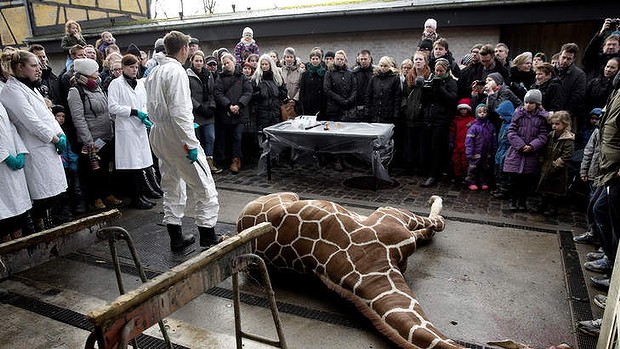 Curious as to what others thought, I came across these responses on the web that made me wonder:

The emperor has no clothes now, we all understand the level of civilization that Northern European Countries have. This logic of black and white led to Hitler’s rise, the wonderful Europe of poverty and the rise of all cultures where all look great on the surfce but generates monsters underneath. I genuinely feel sorry for the level of intellect and culture that the Danish people lack.

What I find inexcusable, though, is the manner in which the sad event was turned into some form of gruesome entertainment with crowds watching his dissection. There may be rational reasons for killing him, but allowing crowds – especially those containing children – to watch the aftermath is rather sick. Watching a wildlife documentary with predators killing other animals is one thing, but this is different somehow.

Then there is the question why they did not send Marius to another zoo. There were several that offered to take Marius. Most of them are not part of the EAZA-led breeding program and that was apparently the problem. According to Jörg Jebram, who oversees the European endangered species program for giraffes and supports the decision, these zoos could later have sold Marius to a circus.

So Marius was not sold to another zoo because Copenhagen Zoo thought there was a risk they would sell him later to a circus. What a lame excuse.

Yorkshire Wildlife Park also offered to take Marius but Holst wouldn’t let them because he thinks they should give that space to a giraffe of different genetic make up. So now Holst is telling other zoo directors how to run and manage their zoos.

I know some people will be thinking, well, the lions need to eat, and they will eat dead animals one way or the other, so what’s the difference? The difference is that in the wild, a lion will almost never catch a young healthy adult giraffe. It’s the limping, or unhealthy, or old ones that get caught in the wild, maintaining a very natural balance and healthy herds, and often catching animals that would die soon anyway. The difference is that these animals should never have been in captivity anyway. If they hadn’t been, people wouldn’t be faced with the diminishing gene pool now! Zoos use the conservation issue as an excuse for their existence. They’ve been doing it now for over 2 decades (using that excuse). If they’re so efficient, how come in that amount of time, more animals have not been re-introduced into the wild? How come so little investment is going into actually buying or protecting natural habitat land, in order to preserve what little we have got left of true nature and natural habitats? If it was all about conservation, why do they keep animals who are in no danger of becoming extinct? These zoos and conservation people are just hypocrites. If these zoos truly cared, they would only have in them the species that are truly near extinction, they would only have these programmes with the sole aim of re-introducing those animals to the wild and they would use their profits to protect natural habitats, by campaigning fiercely, educating and buying land for natural parks in the countries where these animals come from. Going ahead with killing this young healthy giraffe was totally wrong and unjustified, especially after the offers to take the giraffe.