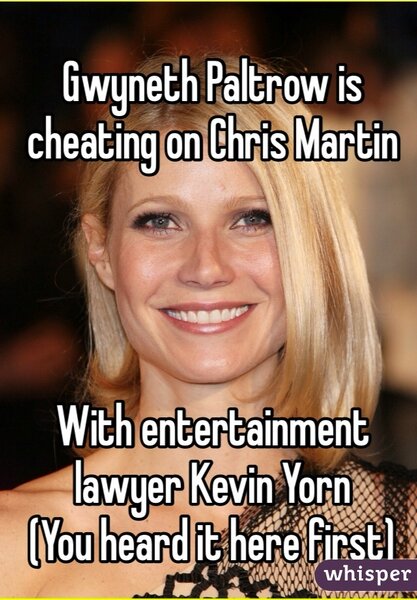 While Vanity Fair‘s Graydon Carter may have passed up on the opportunity to spill the beans on a purported adulterous love affair courtesy of actress and society goody too shoes, Gwyneth Paltrow, social sharing start up app, Whisper, has not, as it irrefutably this afternoon insisted that Gwyneth Paltrow is cheating.

The new start up sharing app works by promoting, as it’s moniker suggests, whispers, or to be more exact, gossip between those of in the know as to the ongoing dealings of various figures.

Under the guise of the app’s managing editor, Neetzan Zimmerman who is well known as a former Gawker honcho and big traffic getter (as we will soon discover why) the prolific gossip writer took to sending his old employer a note telling that Gwyneth Paltrow is cheating with Hollywood lawyer Kevin Yorn. A breaking news item that Zimmerman assures gawker is a story has been well vetted to be correct.

Asked by gawker to clarify the source, Zimmerman wrote back to say the following: I can’t reveal their identity for obvious reasons, but it’s a person with extremely close ties to Gwyneth who came to us directly after Graydon Carter wrote that missive about why VF walked away from the Paltrow profile last year.

I have no reason to suspect they’re lying about this, and if anyone would know the truth, this person would.

From there we find out Gawker (kids are you salivating on the doorstep, I’m sure Gwyneth is just loving the attention she had so desperately lobbied Vanity Fair in recent months from publicizing) reaching out to the actress’ publicist, Stephen Huvane, who naturally is going to deny that shit until kingdom come.

Tells gawker:  He wrote back (all sic):

That is absolutely 100 percent false. The sours at Whisper is clearly a fake

What exactly is Whisper anyway?

We attempted to explain the app, to which he responded:

This is clearly a fabricated story with no credibility at all.

Ten minutes later, he followed up for the fourth time:

The only time Gwyneth has even recently seen Kevin Yorn (who she knows only casually through business contacts) was on a flight from NY-LA. Gwyneth was flying with her assistant and the CEO of Goop and Kevin coincidentally was also in the first class section. I cannot be more clear with you when I say she is NOT having an affair with Kevin Yorn and I will be notifying her attorneys as well.

Which leads to the messy and awkward question, is Gwyneth Paltrow really cheating behind her rocker husband, Chris Martin? Is whisper really telling the truth? Or is this just an opportunity for the start up app to get its name in the limelight and fully entrench itself in the dizzy parallel of the purveyor of media gossip? Yes kids, an app that can drivel gossip all day long for your guilty pleasure.

Welcome to a brand new journalism. A tawdry tacky one of course…