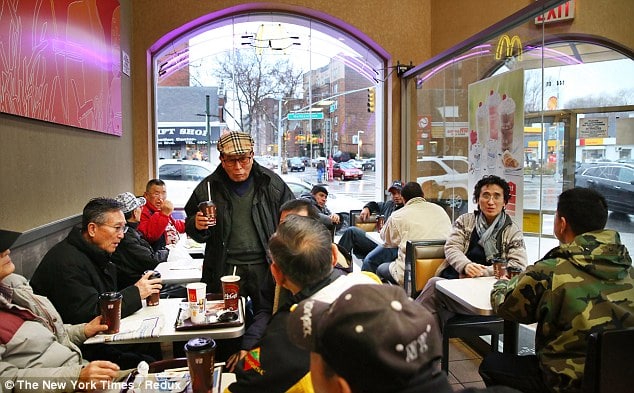 Staff at one Flushing, Queens, McDonald‘s outlet are aghast as to what to do with one group of elderly Koreans who have over recent months chosen to make the outlet a group hang out from sunrise to sunset.

Whilst most would welcome the added business of customers who choose to stay at a venue all day, there’s a catch, these customers like many customers who hog cafes with their laptops and solo cookie and black coffee for hours aren’t buying much. If anything in fact.

Not only does the congregation that gathers on a daily basis not spend money (save for a bag of small fries which they share amongst themselves) according to management they have now aggravated fellow customers who are choosing to stay away.

The pensioners are said to pass hours gossiping at window seat windows amidst piles of newspapers and not very much else, with a few even admitting that they don’t even like the food. This while down the road in the ethnically diverse locale is a senior citizen center where the congregation can meet for the cup of a coffee. At 25 cents.

So bad have matters become that on occasion management has been forced to call cops to move the ever evolving group only to watch in frustration the group return a short while later after going for a walk around the block.

In some instances customers have asked for refunds because there is nowhere to sit.

Told one member of the group, Sun Kim, 64: ‘It is open so early and stays open until after dark when it’s late. It’s warm and the old people like to have a place to meet and talk together.’

To date management has resisted prosecuting the Korean visitors for trespassing, hoping instead that the matter could be solved before it got to that stage.

Told Jack Bert, who owns the Flushing McDonald’s franchise in a statement: ‘I’m sure you can imagine any business would find this situation to be difficult when customers prevent other customers from enjoying the restaurant.

‘We continue to work to resolve this situation and create an environment so customers who wish to enjoy this restaurant have the ability to do so.’

Upon further investigation, it appears that the congregation have chosen the McDonald’s outlet because of the proximity to each other’s homes. Never mind why the flock just don’t choose to meet at each other’s homes in the first place.

Asked why the congregation hasn’t taken up meeting at the nearby Korean Community Service Center, Sun Kim responded that the center was not open long enough to suit her and her friend’s needs. Alas.

Perhaps aware that they may have at times outstretched their welcome the group from time to time now meet at a nearby Burger King. Until that is Burger King starts to complain too.

I think it is fantastic that McDs has become the hang-out for the elderly and marginalized. It is a place of connection, company, and well-being. It seems the very least this giant corporation can do to give back to the communities it’s made its gabillions on. As corporations come to replace government on so many levels, they have an obligation to step up to the plate and accommodate the communities they move into. An extremely tiny investment in size would easily take care of this problem.

I suspect both a cultural and age divide here. Being told you are not welcome is probably not the easiest thing for seniors to hear again, and if it is coming from someone outside their race and culture the stakes are raised. With the added attention of being thrown out by the police, pride kicks in to defend a place that has become a home away from home. Why not have representatives from the City’s Commission on Human Rights (or some similar group) mediate. Find out what is irking the seniors, acknowledge what is special about this place (free, well-lit, warm, view of the neighborhood, street level accessible access), and see if it can be replicated elsewhere in the neighborhood. If McDonald’s can be forgiving, they might contribute a nominal but respectable amount to a community group that would replicate whatever the seniors find comfortable about McDonald’s.

McDonalds is private property.  They can set rules and limits.  They can also ban people for trespassing for any reason or no reason and once someone has received a trespass warning,  if they return they can be arrested.  I know these old codgers think they are entitled to whatever they want, however, when on private property they must do as the owners say.  I know McDonalds doesn’t want a PR problem or a lawsuit but their huge corporate law department should be able to find a way to shut these as-shats down, especially because their loitering is causing problems for other customers, so they should have a case.  I hope they do.  Enough is enough with this entitlement society. Old people are not exempted from societal mores, rules and laws.

It seems to me it’s ok for Mcdonalds to exploit 3rd world labor, as well as the people in our conuntry and undeniably others, but when you take to long in there store watch out, suddenly the law and right and wrong come into play? this is some sort of Joke.