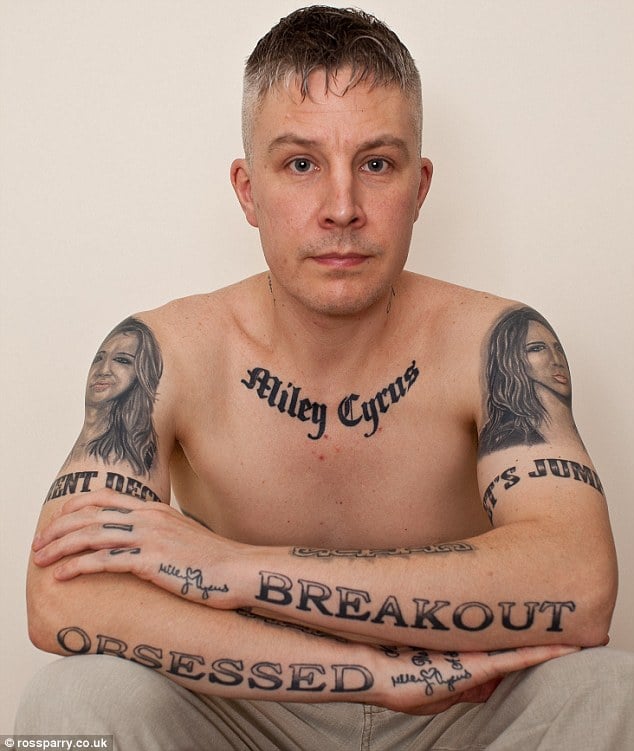 Carl McCoid is an avid Miley Cyrus fan. So avid that the 40 year old to date has covered his body with 22 tattoos of the singer. But it may have come with some unintended consequences, the break up of his marriage….

After first collecting photos and watching interviews of Miley Cyrus back in 2009, Carl McCoid decided to go on and tattoo his body with the star’s image, lyrics, quotes on his arms, torso , hands and leg.

Carl, who runs an ironing business in Bridlington, East Yorks, the UK, has the letters ‘M-I-L-E-Y’ daubed on each finger of his right hand.

He also has her name inked down one arm, on his hand, as well as a giant portrait of the star down the right side of his torso.

Yet what many would wonder might count for an unhealthy fascination, McCoid has dismissed as simple homage to the young star. That though may not necessarily be the way his wife may have seen it who went on last year to divorce her husband.

In fact McCoid has gone on to tell in the past McCoid said that falling head over heels for the 21 year old pop star helped him get over his divorce. Never mind that some wonder if it caused it.

Nevertheless Carl McCoid these days wonders if it may indeed be an unhealthy obsession, having gone on to tell the UK’s sun: ‘I think I need to go and see someone about it.’

And how does Miley Cyrus herself see the homage? She’s gone on record to tell that she has felt ‘creeped.’

Interestingly boldsky tells Carl McCoid took the singer’s help when he was going through a difficult divorce in 2011 and assures that his divorce was not because of his love for Miley, although he now considers her to be his ‘wife.’

Reflects Carl: ‘Loads of people get all sorts of things tattooed onto their bodies, like Chinese symbols, or pictures of cartoon characters, why shouldn’t I be allowed to have loads of Miley Cyrus tattoos?’ 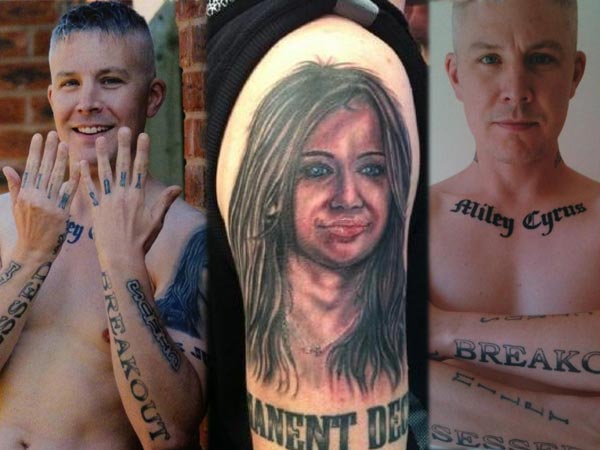