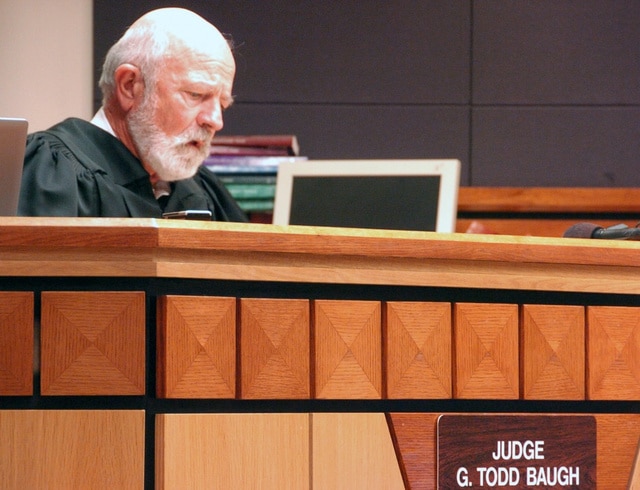 Montana District Judge G. Todd Baugh has gone on to cause a ruckus after sentencing a man convicted of assaulting his girlfriend to write boys do not hit girls 5000 times, in addition to six months in jail time.

It’s not the first time the judge has been in the hot seat, a rape case he presided over went on to cause a shit storm when he chose to sentence a former teacher to a mere 30 days in jail for the then rape of a 14 year old girl. The girl, Cherice Moralez would go on to commit suicide two years later.

After the sentencing  Baugh apologized for remarks in which he told the girl was far older than her chronological age but not the sentence.

“I don’t know what I was thinking or trying to say,” he would go on to later tell. “It was just stupid and wrong.”

In a letter to the editor of the Gazette, he said he was “not sure just what I was attempting to say, but it did not come out correct.”

“What I said is demeaning of all women, not what I believe and irrelevant to the sentencing,” Baugh wrote. “My apologies to all my fellow citizens.”

Which perhaps goes some way in explaining the Judge’s latest position with respect to Pace Anthony Ferguson, who had recently been found guilty of physically assaulting a woman and fracturing her face in three places during an August 2012 argument.

For his troubles, along with the special conciliation assignment (one wonders the judges?) the 27 year old was also ordered to pay the woman’s $3800 in medical bills.

In exacting the writing punishment, Judge Baugh told Ferguson to number the list, 1 through 5,000, sign it and mail it to him by May 23. Just in case nobody thought this time he didn’t mean business.

In assigning Ferguson a six month jail sentence, the judge went on to serve the maximum allowed sentence for a misdemeanor assault.

But it gets better. Much better.

That same day Ferguson appeared for a disposition hearing for violating the terms of his release for an attempted knifepoint robbery in 2003. For multiple violations, including the most recent conviction for hitting his girlfriend, he was sentenced to eight years in prison.