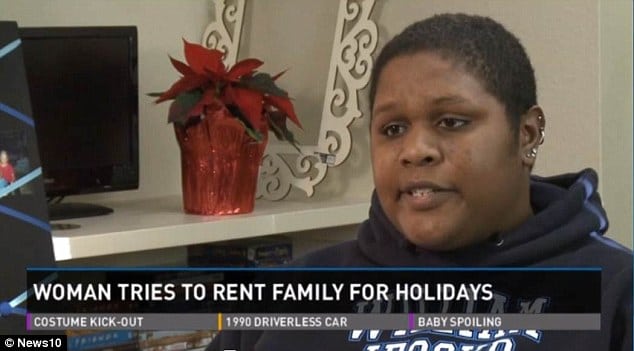 Jackie Turner, 26, an A grade student attending William Jessup University has turned to craigslist in search of a family to rent this holiday season.

Told Turner in her craigslist post: ‘I am looking to rent a mom and dad who can give me attention and make me feel like the light of their life just for a couple of days because I really need it.’

Turner, estranged from her biological parents goes on to offer prospective candidates $8 an hour for their services.

Told Tuner to News10: ‘I’ve never felt the touch of my Mom hugging me and holding me,’

’ I don’t know what it’s like to look in my dad’s eyes and feel love instead of hatred.’

Since the revolving media attention the woman has received, Turner has gone on to reveal that she has been physically, sexually and emotionally abused since she was a little girl.

To escape the violence at home, Turner told she spent years living on the streets where she had picked up a drug habit and found herself in a gang.

She went on to be eventually arrested for grand theft and served nearly a year behind bars – an outcome that Turner tells marked a turning point in her life.

Upon her release in 2010, Jackie Tuner decided to go to a religious camp for troubled teens called Christian Encounter Ministries.

Three years later, Turner would find herself occupying the role of a presidential scholar at William Jessup boasting a 4.0 GPA.

Despite her academic acumen, the woman tells she still has a deep void inside her that she feels only a family could fill – even if it’s only a rented one.

Tells Jackie Turner: ‘My biological parents aren’t here, and it’s kept this hole inside of me.’

With that Turner came up with the idea to lease a family for the holiday season so she could have someone who would listen to her and cry with her – no strings attached.

Since bringing attention to her plight, dozens of families have responded to the woman’s plea, offering to take Turner in free of charge. Yes kids, humanity still exists.

Turner’s decision to go public with her pain and longing for a family has also struck a chord with other people who have suffered abuse.

The college student has been receiving emails from men and women openly discussing their childhood traumas.

‘People are out there with the same heart inside of them,’ she said. ‘Some of them with a greater drive then mine.’

Jackie is now hoping to arrange a meeting for all the people who have answered her ad so that no one would be alone this holiday season.