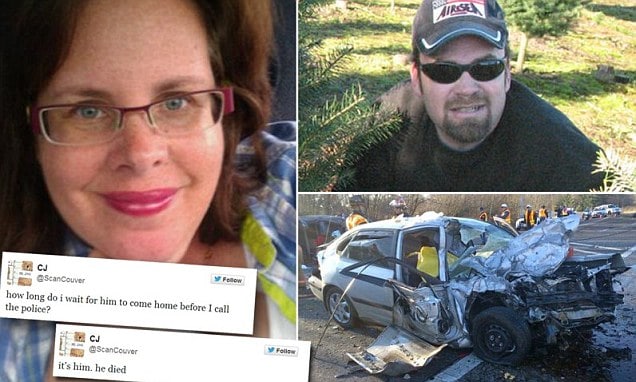 A mother of two, Caran Johnson, 41 has gone on to find a live tweet that she updated on social media involving a deadly car accident she witnessed was that of her husband.

Using the twitter handle, @ScanCouver the mother began tweeting about a two car collision that had occurred on Interstate 205 southbound in Vancouver circa 1.40pm Pacific time yesterday.

However, as the woman updated her followers on the scene of the accident, the state police scanner enthusiast became increasingly worried when she realized her husband, Craig Johnson, 47, would be traveling home on the same route.

The mother’s tweets quickly became frantic when wrote that not only was her husband late, but he hadn’t answered his phone as she began to suspect the worst – only for her profile to be suddenly updated with the stark words, ‘it’s him. he died.’

The woman had first heard about the car accident on Interstate 205 southbound moments after the crash over the police scanner on Wednesday afternoon.

Commenting on the notorious stretch of road, Johnson says that she ‘hates that section’ of the highway because it has ‘Too many on ramps, speeders and too few lanes.’

The Columbian‘s staff photographer, Zachary Kaufman, who was at the scene of the collision and interacted with Johnson from the scene, updated his Twitter profile to say there was ‘lots of debris on the roadway.’

Retweeting this breaking news update from local newspaper the Columbian, Johnson announces that one person had died in what was confirmed as a two-car wreck.

Retweeting the news that a helicopter had to land to rush the injured to hospital, Johnson began to fret after around 10 tweets when she found out that there has been a fatality at the scene.

‘I’m trying not to panic, but my husband left work early and he drives 205 to get home. He’s not answering his phone,‘ tweeted the woman.

Sharing the news with her almost 1,000 strong following that her husband is also late, Johnson informs them that her husband suffers epilepsy and begins to speculate that his condition may have caused a crash.

By this stage the woman’s tweets become increasingly desperate before then imploring her followers ‘how long do I wait for him to come home before I call the police?’

Johnson then tells her followers that she has become a ‘basketcase’ with worry after phoning her husband’s work and being told that he left early because he was feeling faint.

An hour after the crash, Johnson goes on to tell her children have come home – although she still has no idea where their father is.

Then she goes silent on Twitter for around 35 minutes.

Then, two hours after her first tweet, in a stark and matter-of-fact update, Johnson simply informs her followers that her husband, Craig, has indeed been named as the victim of the accident she was live-tweeting only one hour before with the words, ‘It’s him. He died.’

The Washington State Patrol and Vancouver police confirmed that Craig R. Johnson, 47, was killed about 1:40 p.m. when his Hyundai Elantra crossed the median and collided with a pickup truck. The truck driver went on to survive but was seriously injured.

A woman who was driving the second car involved in the incident was taken to a hospital with serious injuries, a broken femur and a collapsed lung.

Tellingly, a local woman, April Sturdevant tweeted Caran Johnson in a bid to to pass on ‘words of comfort.’

Sturdevant said she had been at the scene of the accident and had been with Mr Johnson during his ‘last breath.’

It is not known if Johnson and Sturdevant have spoken since the accident.

Washington State Patrol spokesman Trooper Will Finn told that at the moment, ‘We’re not quite sure what’s happened yet,’ with regards to the crash.

Told Finn who was at the accident at the time: ‘I may tweet something and she may tweet back. One night we exchanged a recipe for a low carb pizza,’

At 2:20 p.m. PT, Johnson sent a tweet to Finn, ‘@wspd5pio do you have descriptions of involved vehicles?’

‘@ScanCouver sorry. Not yet.,’ Finn replied.

Added Finn: ‘Immediately, I went into overdrive mode and I stopped tweeting the whole thing. I didn’t want someone to find out over Twitter that their husband passed away. I didn’t want her to find out that way. That is a hard thing to go through,’ he said.

In the normal course of events, Finn would post a picture of the crash scene, but this time he didn’t in case Johnson recognized her husband’s Hyundai.

‘I feel terrible. I still feel terrible,’ Finn told. ‘Our hearts go out to the family. This person was a member of our community and we just lost him.’

Told one commentator: here’s the link to a donation page to help with funeral costs and other things for Caran Johnson and her family, if anybody is interested. He left behind two little boys. 🙁