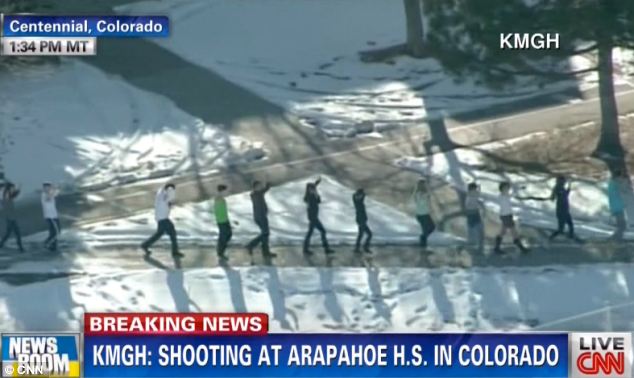 Here we go again kids. The disgruntled American dream leading to another school shoot out.

Authorities are telling this afternoon that an as of yet un named suburban Denver student has taken his own life after shooting and injuring two fellow students at Centennial, Colorado (yes Colorado once again) school, Arapahoe High school.

At present Arapahoe County Sheriff Grayson Robinson has told the shooter entered Arapahoe High School in Centennial armed with a shotgun and looking for a teacher he identified by name.

Upon learning that the student was looking for him it is said the teacher immediately left the school. It is not understood why the Araphoe High school gunman sought the teacher.

From there the gunman went on to shoot two students, one of whom is in now in serious condition.

Authorities have questioned whether the seriously injured student may have confronted the gunman.

To date authorities believe the gunman acted alone. They have gone on to tell they have found a possible molotov cocktail at the scene.

The shooting comes a day before the one year anniversary where Adam Lanza went on to massacre 20 children and six adults at Sandy Hook Elementary school.

Since the confrontation, Sheriff Grayson Robinson has congratulated the quick thinking of the teacher who the gunman sought, telling the following: ‘In my opinion, this was the most important tactical decision that was made,’

‘He took himself away from the school in an effort to get the shooter to go with him.’

The UK’s dailymail goes on to note that the school is in the 2200 block of East Dry Creek Road in Centennial. Around 2,230 students attend Arapahoe High School, which is a part of Littleton Public Schools.

It is eight miles from Columbine High School where two students opened fire, shooting dead 13 people and then taking their own lives in 1999.

The high school is also 17 miles from Aurora, where gunman James Holmes allegedly opened fire in a movie theater last year, killing 12 and injuring more than 70.

Once again calls for gun control legislation have been brought forth by politicians seeking to allay concern amongst concerned citizens. A claim that to date has been brought little reprieve in the on going conundrum, it’s a school day let’s take a life….

The only effective thing that can be done, and should be done, to prevent these nightmares is for the mainstream media to stop promoting and inadvertently glorifying the shock of this outcome. Yes it deserves to be reported, but not 24/7 with pundits, specials, and such an ocean of emotional content that it feeds the next lunatic wanting to “make a statement”. Relegate this to simple news and report it as a murder.

Videogames, violent movies, gun control., etc., none of this will have a measurable effect on prevention. But if the mindless media stops this mindless promotion, it just might.

A nutjob goes off his rocker and starts shooting………and it has absolutely nothing to do with Sandy Hook. He probably didn’t have a clue what day it was………but the Media will make sure the we will never forget……………keep it rolling to sell the News.

How about just preventing these incidences from happening in the first place? And, nobody wants your darn guns. We want to get to the bottom of why children see no other way out toward resolving conflict than violence. That’s the real underlying issue here. Violence seems to be the go to resolution to any problem these days – just look at the recent knockout events. Some of these situations involve guns (many mostly in educational institutions or public places), some of it doesn’t. Gun safety training or responsible gun ownership is only a small portion of this problem.

In any case, it’s ridiculous that our children can’t even feel safe in our schools anymore these days. Doesn’t that bother anybody?

Please don’t come at me with labels and stereotypes. Those do not promote debate, rather they distance us from one another. I don’t care about people’s affiliations. I care about what informs their opinion and decision making. So, let’s have a debate, not an argument. Then maybe we can get to the bottom of this craziness in our society today.