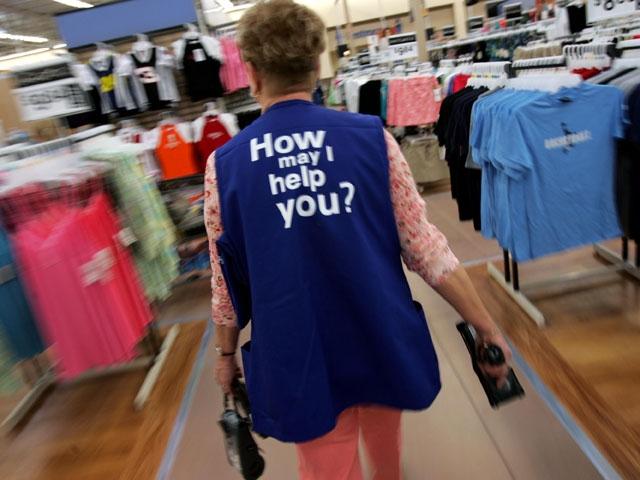 While American’s gear up for Black Friday shopping deals, Wal-mart employees are also gearing up for their own take on the American wet dream by hosting national strike alongs to challenge their employers labor practices.

Principally what’s pissed off employees of the nation’s largest top employer is it’s poor pay (many employees are forced to go to food pantries and collect food stamps, organize food drives to go from starving and this is with holding full time jobs) and company demands that inhibit worker freedom to organize and challenge company policies. One of them being the demand that employees turn up to work yesterday whilst most of congregated with family or risk being fired.

Tells one employee, Myron Byrd, 45 via salon: “I’m sacrificing myself, along with others, to do this to show Wal-Mart that hey, I’m not afraid, they not afraid, we not afraid.”

Not that Walmart is necessarily afraid anyway. At least not for now as the local governments continue to cave in to Walmart’s demands to keep minimum wage increases off the to do list.

Reflects aljazeera: The average worker makes $8.81 an hour or $17,000 a year, forcing many to rely on taxpayer-funded public assistance programs to make ends meet. John Paul Ashton, a 31-year-old Washington-based Walmart maintenance worker who makes $20,000 a year, has no choice but to rely on food stamps to put food on the table. Patricia Locks, a 48-year-old single mom who has worked at Walmart for 11 years in the Seattle, Washington area, barely makes $19,000 a year. She lives in low-income housing, relies on food banks and food stamps to feed her teenage daughter, and can’t afford health insurance.

Goes on to also reflect salon: For the UFCW (United Food & Commercial Workers union), Wal-Mart poses an existential threat, driving down standards for competitors and endangering hard-fought gains. “Our companies are saying, ‘If Wal-Mart can get away with it, why can’t we?’” an employee from a unionized Safeway told me as she prepared to join a Black Friday protest at a Maryland Wal-Mart last year. But the Wal-Mart challenge extends far beyond the company’s 1.3 million U.S. employees, or the UFCW’s 1.3 million members. By pioneering tactics to cut labor costs and avert labor organizing, and instigating imitation among suppliers, subcontractors, competitors and admirers across industries, Wal-Mart is hastening a transformation in U.S. work, toward an ever-more-present future in which workers – whether fast food cashiers or adjunct professors — lack living wages, workplace democracy, job security or even legal recognition as employees.

Hardly the promised dream of advancement. Then again one wonders if it ever occurred to Walmart and similar outlets who pay their employees meager earnings and benefits (or simply none at all) how they expect to move wares off their shelves if workers who also happen to be their consumers don’t have the means to support outlets like Walmart?  An outlet that managed to eke out $17 billion in net profits last year, with its CEO, Michael Duke‘s taking home an annual $35m salary.

Goes on to reflect salon: Faced with a future of declining leverage and relevance, U.S. unions have taken up a range of tactics on full display in the Wal-Mart effort, including “comprehensive campaigns” that wield political, legal and media weapons against a company’s brand, growth ambitions and consumer loyalty; “minority union” tactics in which smaller numbers of workers take bold public action to embarrass management and engage more reticent co-workers; organizing in solidarity across supply chains and national borders; short-term strikes designed to maximize public engagement and minimize the risk of retaliatory firings; and working with or through “alt-labor” groups that aim to transform workplaces without seeking collective bargaining.

Whilst US labor law bans companies from punishing workers for organizing it does  precious little to avert or avenge such retaliation when companies are dead set on maintaining control.

Salon goes on to note that while core activists say they’re only emboldened by the fear campaign, by all appearances Wal-Mart threats and firings have so far succeeded in stemming the growth of Wal-Mart strikes.

Yet while recent protests portends an opportunity to restore some kind of bargaining power to employees, aljazeera goes on to note the cost of such protests and Walmart’s ability to essentially intimidate and even fire non unionized employees from striking:

Because they are not unionized, many are paying a heavy price for speaking out. According toOURWalmart, 80 employees have been fired for engaging in civil disobedience. Employees who were illegally fired for speaking out have spent the past few days in freezing weather outside Walmart’s corporate office in Bentonville, Arkansas calling on executives to pay a living wage and end the retaliation. The National Labor Relations Board is pursuing charges against the company for illegally firing and disciplining more than 117 workers, including many who went on strike last June. It found that Walmart stores in 14 states across the country unlawfully threatened, disciplined, or terminated employees for engaging in legally protected strikes and protests.

Goes on to tell salon:  As past failed union-backed efforts proved, Wal-Mart would sooner concede money than power, and public scrutiny and embarrassment alone stand little chance of dislodging real decency or democracy without a serious threat of escalating Wal-Mart worker uprisings.

Which raises the inconvenient question, whilst some of you scoop bargains today (because your take home pay has most likely been aggrieved as well which necessitates the national stampede for bargains to stay with the curve) what of your fellow American who are staring at a bleak abyss trying to make ends meet? Then again perhaps America really wont care until a majority of them find themselves in the disingenuous position that so many Walmart employees are currently forced to reckon with, something that seems increasingly to be the turf of non skilled employees. But for now best to enjoy the steep price discounts that are purportedly being offered perhaps courtesy of other Americans who have seen their labor power marginalized…