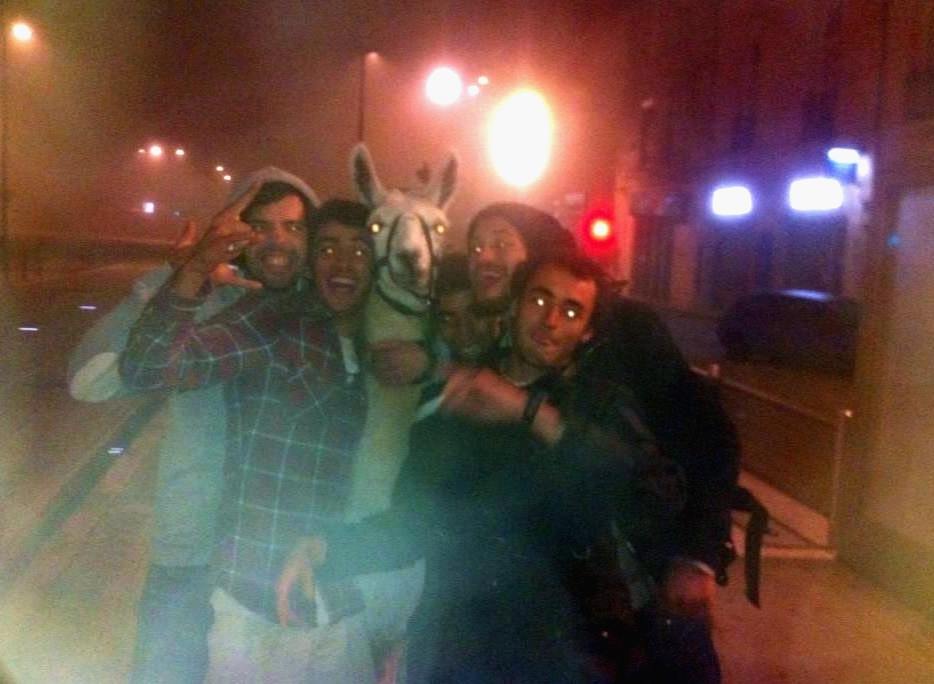 Kids here’s a stunt I wish I got to pull off during that phase of my life where animals, bears, and trinkets were indistinguishable from the other. It includes the fantastic but highly deplorable act of five drunk French teens stealing a circus llama and naturally taking it for a tram ride. Yes cause llamas can never get enough of tram rides, all them merry sights make them giddy…

The good shit came to happen this past Thursday when the youths went on to abduct the llama after wandering into a closed down circus just before dawn.

Local press go on to tell that the Bordeaux teens had just exited a club, feeling brazen and giddy after a merry night of the good cheer.

Told one of the arrested teens (yes them bixches got arrested): “We went in and played with the animals,”

“We ended up taking a llama with us.”

Kids aren’t you frothing at the gills? Haven’t you always wanted to walk away with a prized pet and plunk it on the city tram with you?

The group had originally set their hearts on taking a zebra home, but after the bixch proved too stubborn they happily settled for the more amenable Serge.

Went on to tell one of the arrested youths:

“It walked with us like a good dog would have,”

The group took the animal onto Bordeaux’s tram system but were rumbled after passengers reported the llama’s presence to a ticket inspector.

“He moved along the tram and we couldn’t hold onto him,”

“The inspector made him get off and tied him to a lamppost.”

Reports are confused as to what happened next but it seems the teenagers proceeded to bid their new friend adieu, leaving him in the care of the inspector.

Although the teens were soon arrested for their caper, authorities to date have declined to charge the drunk youths. Of course one imagine the llama having put a good word for their abductors.

Since the abduction, Serge the llama has gone on to be a national hero with a Facebook page since being set up requesting clemency for the teenagers now topping more than 720 thousand likes.

Serge the Llama himself has even leapt to the group’s defence – although this is Serge Lama, a French singer who also hails from the region.

“It’s a joke that ended well,”

“We’re so used to seeing unfunny things whereas this has helped break the ambience of moroseness [here in France].”

“That’s what we need right now.”

Serge (the llama) is reportedly doing fine, and was even able to perform in his accustomed routine at the circus on Thursday despite his late night out.

Despite the llama being safely returned, its owner, the director of the Circus has lodged a complaint : “The offense is too serious: a zebra nearly escaped from the cage. We had to run everywhere to catch it.”

That said the owner has since told that he has nothing against the teens who abducted his llama and has since dropped demands for charges.

Twitter user x_cappelaere posted two photos of the llama on Thursday, one with the teens (above) and one without, claiming they were taken by a colleague, no doubt by the frazzled zebra….

If only all llamas could get to live the high life too….