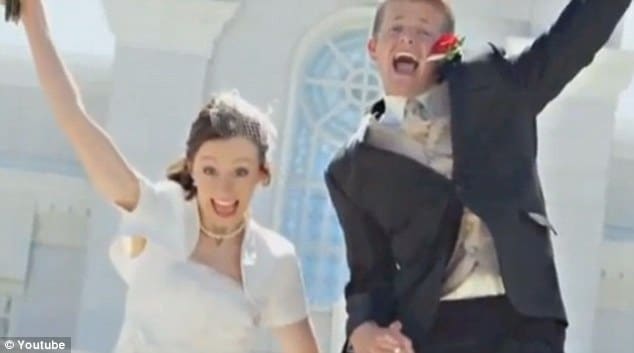 Blogger Seth Adams has gone on to cause outcry after penning a blog, marriage isn’t for you whereby he reveals how as a newly wed man he has come to the realization that marriage is simply not for him.

Yet rather than be met with disapproval from his wife, of less than two years, Kim, she and many of the four million individuals who have come to read the post actually agree with Adams.

Writes Seth Adams: ‘Having been married only a year and a half, I’ve recently come to the conclusion that marriage isn’t for me,’

‘No, a true marriage (and true love) is never about you. It’s about the person you love – their wants, their needs, their hopes, and their dreams. Selfishness demands, “What’s in it for me?” while Love asks, “What can I give?”‘

The mormon blogger goes on to tell how he first met his wife when they were just 15 years old, how they went on to become best friends for ten years before getting married a little more than a year and a half ago:

‘The nearer Kim and I approached the decision to marry, the more I was filled with a paralyzing fear. Was I ready? Was I making the right choice? Was Kim the right person to marry? Would she make me happy?’

A conversation with his father put paid to any doubts Smith had about his upcoming nuptials.

Goes on to tell Seth Adams what his father told him: ‘Seth, you’re being totally selfish. So I’m going to make this really simple: marriage isn’t for you. You don’t marry to make yourself happy, you marry to make someone else happy,’

The blogger and editor-in-chief of ForwardWalking.com has tried to carry his father’s advice with him through his first months of marriage.

His message about the nature of true love and marriage has struck a chord with many of those who have read it and it’s been reprinted widely on the web.

Went on to tell one commentator who perhaps crystallizes many of our collective thoughts when it comes to the tribulations of love and marriage:

‘Loved it! After 15 years of marriage, and several near misses with that grey line in the affair department, my husband finally figured that out… I finally was ready to walk away…  He would now tell you he was so wrong and not thinking about that other ‘person’ he should have been taking care of – our marriage.’

The idea that you’re marrying for reasons other than your own happiness – even if you get happiness by making your partner (and children) happy is demonstrably untrue. Psychologists have long since proved that the emotional roots of and reasons for altruism are – wait for it – to make the altruist.

Over the long haul, people inevitably do what makes them happy…not what makes other people happy. Trying to convince ourselves otherwise is – in the end – an exercise in futility.

Our selfishness and our egotism are with us always. If we’re on our game, and being conscious, we can ride that tiger. If we’re not, the tiger rides us. But the tiger never really goes away.

If you do not want to get married fine, dont, but for those of you who do, you have to put your needs aside and think about how the other person is feeling and what that person wants. I admit myself I have not been thinking about my significant other in my relationship but that’s going to change TODAY! The writer of this article and his father are smart men which doesn’t happen very often!

This is such hogwash. Marriage is a BUSINESS. You give some things, you get some things. But you DON’T LOSE YOURSELF!!!

Nice sentiments an I agree. Alas they are incomplete and to my mind therefore misleading. What they fail to address at all, is that this beautiful arrangement only survives and lasts when both parties to a relationship get it. Alas, the statistics are in and apparently a) most marriages fail because she leaves him, b) he’s usually surprised and c) she fares better for it and he worse. And all of this is because she thinks marriage is about her, or he thinks marriage is about him, one or the other will be enough over time to have her want to leave, or him.

Marriage in the Western world evolved from the rules Medieval land barons used to control the peasants living on their lands. It’s patriarchal for a reason. It’s based almost completely on primitive religious ideas in male-oriented societies, but ironically nowadays it’s much more destructive to males than females. Any objective observer must conclude that marriage does far more harm than good, but it’s also a multibillion-dollar industry and a gold mine for lawyers, so we can expect the establishment to keep pushing for that walk down the aisle.