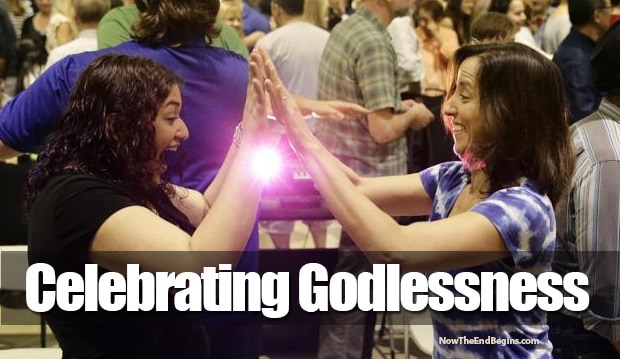 Taking on a life of its own is the phenomenon known as atheist mega churches which involve the congregation of several hundred people rousing to inspiring speech, kindred music, reading, the occasional sermon but no God.

After having found success in the UK, the trend is finding legs here in the US and Australia. It is thought that the movement may have been fueled by social media and spearheaded by two British comedians.

The comedian founders, Sanderson Jones and Pippa Evans are said at present to be on a tour where they hope to drum up donations and help launch new Sunday ensembles.

The duo hope hope to raise more than $800,000 that will help atheists launch their pop-up congregations around the world. So far, they have raised about $50,000.

In bringing awareness to their drive the duo tell that they have no problem with believers but that said still wanted to find a forum for non  believers who were similar like minded people to engage in the community.

Tells Jones who first got the idea 6 years ago to start atheist mega churches: ‘There was so much about it that I loved, but it’s a shame because at the heart of it, it’s something I don’t believe in,’

‘If you think about church, there’s very little that’s bad. It’s singing awesome songs, hearing interesting talks, thinking about improving yourself and helping other people – and doing that in a community with wonderful relationships. What part of that is not to like?’

In ascertaining Americans religious beliefs the Pew Forum on Religion & Public Life released a study last year that found 20 percent of Americans say they have no religious affiliation, an increase from 15 percent in the last five years.

Researchers nevertheless stressed, that the category also encompassed majorities of people who said they believed in God but had no ties with organized religion and people who consider themselves ‘spiritual’ but not ‘religious.’

Went on to reflect Phil Zuckerman, a professor of secular studies at Pitzer College in Claremont:

‘In the U.S., there’s a little bit of a feeling that if you’re not religious, you’re not patriotic. I think a lot of secular people say, `Hey, wait a minute. We are charitable, we are good people, we’re good parents and we are just as good citizens as you and we’re going to start a church to prove it,’ ‘It’s still a minority, but there’s enough of them now.’

Yet not all atheists are sold on the idea.

Tells Michael Luciano a self described atheist: ‘The idea that you’re building an entire organization based on what you don’t believe, to me, sounds like an offense against sensibility,’

‘There’s something not OK with appropriating all of this religious language, and ritual for atheism.’

Others have told the meetings by the sheer fact of not discussing the idea of atheism and instead congregating with the idea of simply feeling good ought not be considered under the umbrella of atheist mega church as being an atheist assembly.

Yet for some atheists, including Elijah Senn the idea of attending atheist mega church presents a bigger idea:

‘I think the image that we have put forward in a lot of ways has been a scary, mean, we want to tear down the walls, we want to do destructive things kind of image is what a lot of people have of us,”

“I’m really excited to be able to come together and show that it’s not about destruction. It’s about making things and making things better.’