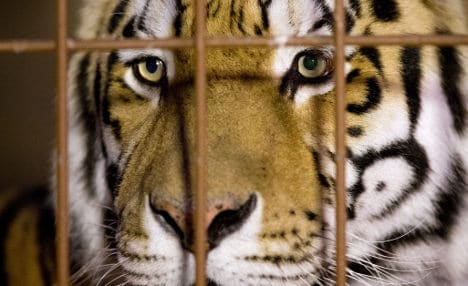 A zookeeper, to date simply identified as Martin H, has found himself being mauled to death by a Siberian tiger after he forgot to lock a door behind him.

Local media outlets report that the zookeeper, a 56 year old experienced zookeeper at Germany’s Munster zoo was at the time laying out food in the outside area when the tiger crept up from behind him.

Authorities went on to tell that the tiger sunk its teeth into the man’s throat, killing him instantly. The incident is said to have occurred in front of horrified visitors.

Zoo chief Jörg Adler went on to tell despite help being immediately called for, there was nothing emergency services could do for the zookeeper.

Reiterated Adler: ‘An encounter like that with a tiger isn’t something that can be survived,’

“There were witnesses, which means we do a reconstruction of the keeper’s death,”

‘We can install only so much technology and so many alarms – when it comes down to it, it’s the keeper who decides,’

“It is a tragedy which is hard to comprehend. I can not describe it.”

Adler went on to tell that the deceased zookeeper loved his animals and that the tragedy was most likely the result of human error and that there are no plans to put down the tiger, who goes by the name of Rasputin. It is thought at present that the tiger had most likely mistaken Martin H for an intruder. It is understood Rasputin had been transferred to his new home from another zoo in 2005.

The attack has since provoked animal rights group Vier Pfoten to protest about the continued captivity of wild animals.

Offered the group: “Tigers are incredible challenging to keep in captivity and potentially extremely dangerous not only for keepers but also for visitors.”

Perhaps one wonders given the degree of love and affection Martin H had for his brood his death although disturbing could in some   way be perceived as poetic harmony. Then again isn’t that part of the allure, contending with the predatory and unpredictable nature of the wild?