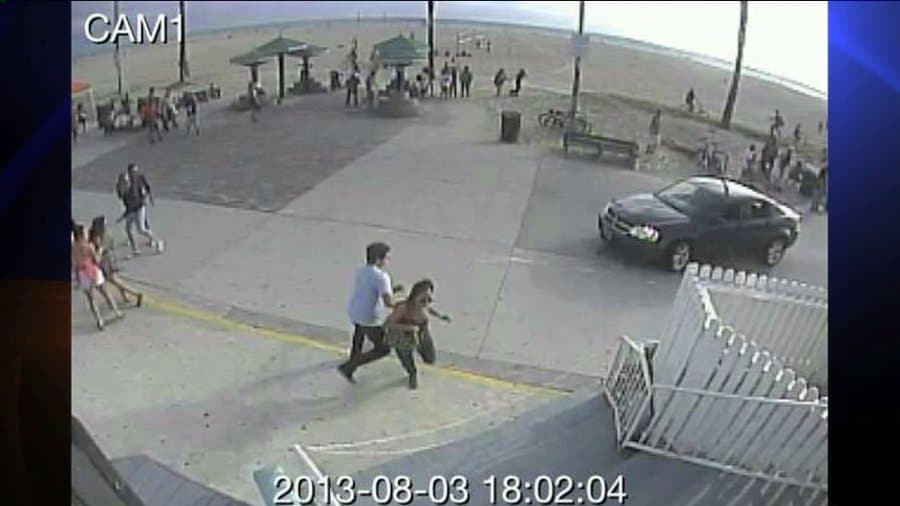 Yesterday’s Venice beach boardwalk crash has today led to a 38 year old individual by the name of Nathan Louis Campbell being booked for investigation of murder after  handing himself to authorities shortly after the rampage.

The hit and run crash which is said to have been aimed at purposefully instigating casualty left one woman dead, an Italian woman, Alice Gruppioni, 32 on her honeymoon and injuring eleven others, of whom two were seriously injured, one critically.

Told one witness as the driver accelerated onto the boardwalk:

‘…the driver was out for blood.’

Security video goes on to show Campbell, the suspect, parking his black car alongside the seaside boardwalk as the sun sank, surveying the scene for several minutes before getting back into the car and speeding into the crowd.

Told witnesses as motionless individuals lay on the ground as the driver then made for a getaway:

‘I was half a mile from the scene, but you could see just this mass of people trying to get out of the way … just a lot of people screaming,’

‘I saw somebody flying up in the air… when I came upon the scene, there were a bunch of people on the ground, bloodied. Some looked pretty mangled, head injuries, just a lot of blood.’

Other witnesses went on to tell how victims were dripping with blood:

‘There was people kind of stumbling around, blood dripping down their legs looking confused not knowing what had happened, people screaming.’

‘It was blocks and blocks of people just strewn across the sidewalk.’

“I was half a mile from the scene, but you could see just this mass of people trying to get out of the way … just a lot of people screaming. It was horrible.”

“I saw somebody flying up in the air…. When I came upon the scene, there were a bunch of people on the ground, bloodied. Some looked pretty mangled, head injuries, just a lot of blood.

Authorities have since gone on to tell that after ramming into bystanders, Campbell continued south along the  boardwalk before turning onto Sunset Avenue. He is said to have later abandoned his car about a mile away fleeing on foot.

About an hour after the crash, a man matching the description of the driver walked into the Santa Monica Police Station and told them that he was connected to the incident, tells the Los Angeles Times.

Asked whether Campbell was intoxicated, authorities demurred to answer.

Authorities went on to tell that the lone individual who ended up dying, Alice Gruppioni, dying a few hours later in hospital due to the severity of her injuries.

It is not immediately known what set off the rampage and why Campbell chose the colorful promenade known for its eccentric personalities and deep history to inflict his damage. Of course one can only wonder at the irony of the tragedy occurring at one of America’s most prized fable destinations as a possible indictment on the American dream collapsing as increasingly more disenfranchised individuals take to violence.

At present Nathan Louis Campbell remains incarcerated pending a one million bail application as investigation into the incident continues.

Crazy people running amok is he new normal. There are far too many people out there unequiped to deal with the pressures of modern life and half the world is over medicated.

The area where he started his rampage is a well known heroine trade hang. Wonder if that’s why he started going after people.

Violence of all types has been decreasing steadily in America for 20 years. It is half of what it was in 1994.

I am embarrassed by silly fools that feel the need to apologise for our country because of the actions of a nut.

Great that this Italian tourist got to experience all America has to offer … including senseless acts of violence.

If he had used an assault rifle there would be 11 dead and 1 injured. Then he could have claimed his 2nd Amendment rights.