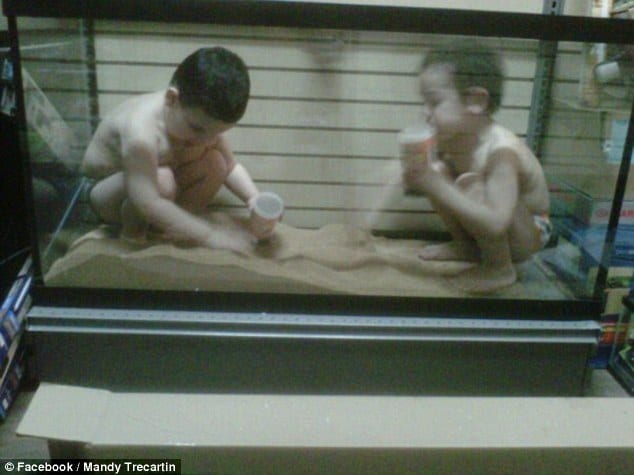 It is now being thought that the two brothers, Connor and Noah Barthe strangled by a pet store python which managed to escape into a friend’s home may have been lured by the boy’s scent.

Photos now being released show the brothers just hours earlier scrubbing out the cage where the 100 pound, 14 foot long python was kept.

Reflected the owner of Little Ray’s Zoo in Ottawa who went on to offer snakes like the African Rock Python that killed the boys on Monday morning do not visually recognize their prey – but if the boys smelled like food, it could serve as a realistic explanation for the attack – which has left experts puzzled.

‘Sadly, the snake could have mistaken them for a food item, which they weren’t.’

At present, it is unclear if Savoie had a permit to keep the python, which are banned in the province except under very strict circumstances.

It has now been revealed that Savoie housed the python in a glass enclosure in his apartment, literally yards from where the boys were sleeping, and not in his shop which had locked cages and pens.

It is also been said that Savoie knew the snake was aggressive and unused to humans but nevertheless failed to take adequate safety measures to ensure the python would not escape.

It is now believed that the python slithered through a hole in its glass enclosure, then up into a ventilation shaft in the ceiling, before that collapsed under the python’s weight, sending the serpent fell onto the sleeping boys – who had come over for a sleepover after a day out with Savoie and his son at the family farm.

Authorities are said they were waiting for autopsy reports before deciding whether charges are brought.

The Royal Canadian Mounted Police revealed that they ordered the python destroyed on Tuesday.