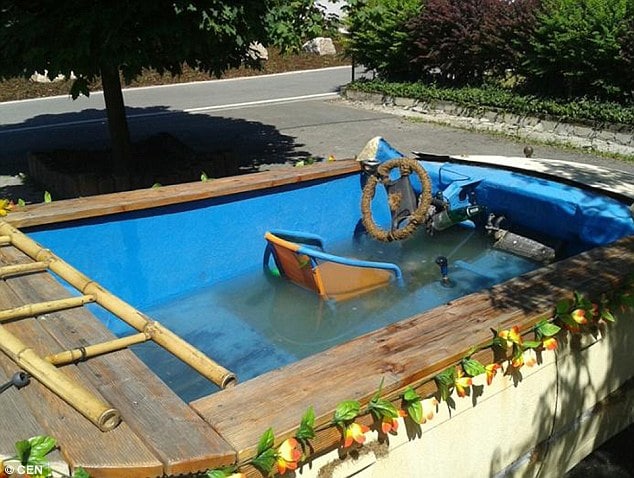 German police officers were left speechless this weekend after they came across a roofless BMW filled to the brim with water with drunken revelers.

The incident happened in Eibenstock near Chemnitz, southern Saxony when a lone police sergeant was making the rounds.

Not believing his eyes, the sergeant came closer to notice the roofless BMW had no registration plates, was boarded with wooden boards and fake plastic flowers and was naturally filled to the brim with water.

The local.de goes on to report aside from the driver, the car held three young males clad only in swimming trunks – one of whom was lolling on the boot with his feet dangling down into the vehicle.

At the time all the car’s occupants appeared to be merrily drunk.

Eventually the young men brought the BMW to a halt, jumped out and proceeded to watch the proceedings from across a nearby dry riverbank.

The sergeant proceeding to investigate the contraption left on the side of the road found that the young men had hollowed out the inside of the car, sealed and waterproofed it, before painting it blue and filling it with water.

Concerned that the men would try to reclaim their “car-pool” and make a getaway, the sergeant let the air out of the tyres, disconnected the spark plug leads and waited for backup to arrive as crowds of curious onlookers began to appear.

Eventually the driver returned to fetch his belongings from the boot. The visibly intoxicated 27-year-old, who insisted he hadn’t been driving the unregistered vehicle, was allowed to recover his shoes and wallet – in exchange for a blood sample.

Police said they were investigating the man on suspicion of drink-driving and of driving an uninsured, unregistered vehicle.

At present police are baffled as to which or how many other traffic laws may have been violated. No word yet on whether the driver and his occupants have been charged.

Shouldn’t you be taking a swim in your BMW this afternoon too…?