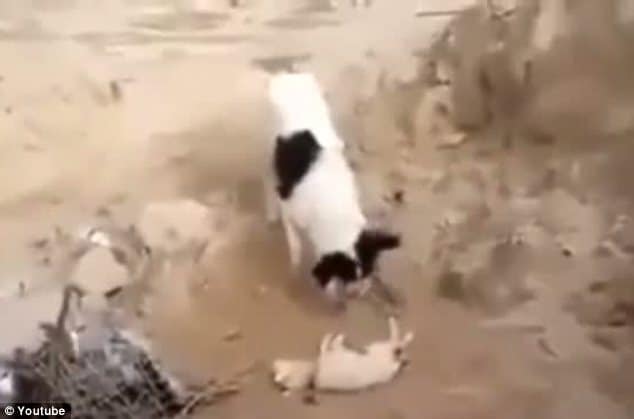 A video of a dog burying a dead puppy has gone on to capture the imagination of viral you tube viewers who have opined the dog was displaying acts of sympathy and compassion. Nevertheless one animal behavioral consultant has gone to explain that there was more actually going on than meets the eye…

Went on to explain Peter Borchelt: “I think that this is a classic case of really interesting behavior — sort of unusual that somebody actually caught it on video — and we make a big deal out of it, and it’s really cute and it sort of reminds us of some of the things we do,”

“I suspect it was more likely just caching dead meat, rather than a soulful response to the demise of a puppy that it wanted to bury.”

The stark description of what probably actually went down is in stark contrast to what many on the web had gone on to comment when the video first came out this past Sunday night.

The Christian Post called the act “compassionate.” The Huffington Post labels it an “astounding act of mourning,” and suggested, “If you didn’t believe animals have the capability to grieve like people do, you might now change your mind.”

Onlookers had watched in awe as the mongrel circled and sniffed the lifeless puppy after finding it in a ditch where it had been left to rot in the midday sun.

But Mr Borchelt said it would be just as ridiculous to assume a dog was ‘praying’ if it had been sat with his paws folded, to think the dog was performing a touching burial for the young puppy.

He did say the dog may not have returned to eat the puppy, it was part of an innate instinct to bury the body – the same instinct which sees dogs bury bones.