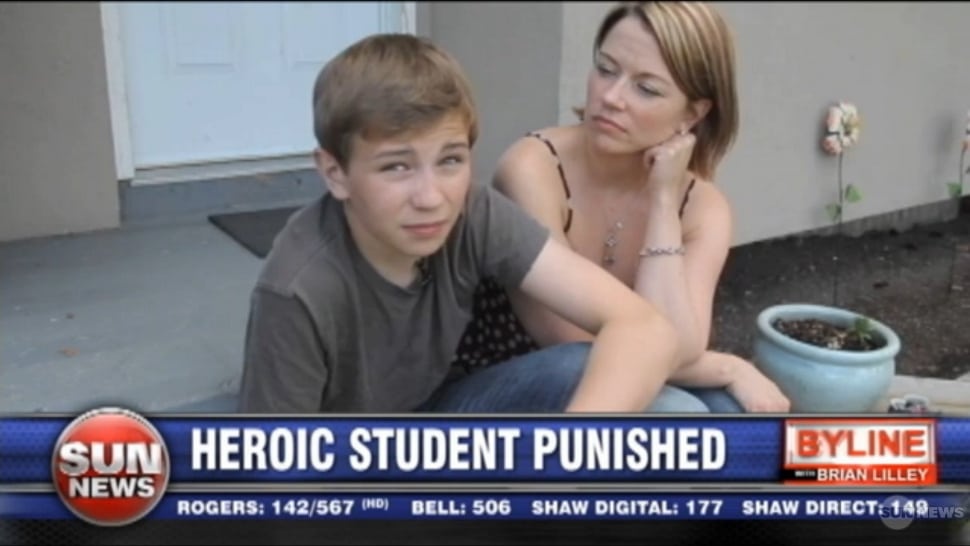 Making headlines is the tale of one seventh grader, Briar MacLean from Calgary who stopped a bully from stabbing a classmate and who has since been reprimanded by the school for his act of bravery.

Told the teen about an incident that took place during class at local  Sir John A. Macdonald junior high school as a fellow student began harassing another:

“I was in between two desks and he was poking and prodding the guy,”

MacLean goes on to add that he didn’t see the knife, but “I heard the flick, and I heard them say there was a knife.”

Briar MacLean goes on to tell he acted on instinct as he stepped forward to defend his classmate, thinking that he had done the right thing.

MacLean’s actions then led to the teacher summoning him to the principal and being summarily then sent home for the day.

“They phoned me and said, ‘Briar was involved in an incident today. That he decided to ‘play hero’ and jump in.”

Leah O’Donnell was from there informed the school did not “condone heroics.”  Instead,she went on to be told Briar should have found a teacher to handle the situation.

Went on to tell Leah O’Donnell:

“I asked: ‘In the time it would have taken him to go get a teacher, could that kid’s throat have been slit?’ She said yes, but that’s beside the point. That we ‘don’t condone heroics in this school.’

The nationalpost goes on to tell that instead of getting a pat on the back for his bravery, Briar was made to feel as if he had done something terribly wrong. The police were called, the teen filed a statement and his locker was searched.

In a statement released after the story appeared on the front page of The Calgary Sun, the school’s principal Michael Bester insisted Briar was not disciplined, but reiterated that he should have asked a teacher for help and that “it s not recommended that students intervene in incidents such as this to ensure their own safety.”

To date the incident is being investigated and no one has been charged.

And then there was the following comments  on the web that made me wonder as well:

Serious question. Whats the REASON they dont “condone heroics”? Is it in fear that a child could be injured doing so (despite the fact another would have been injured if not for the act itself) or is it more along the lines of, we’re afraid of being sued by your parents or the other child’s parents.

In a time when we’re trying to stem bullying, we’re gonna punish anyone who stands up to them? And there’s a big difference between “playing” hero and being one. This kid is the latter and should be praised, not chastised. The teacher should be chastised for not paying attention the whole time the victim’s LIFE was being threatened.