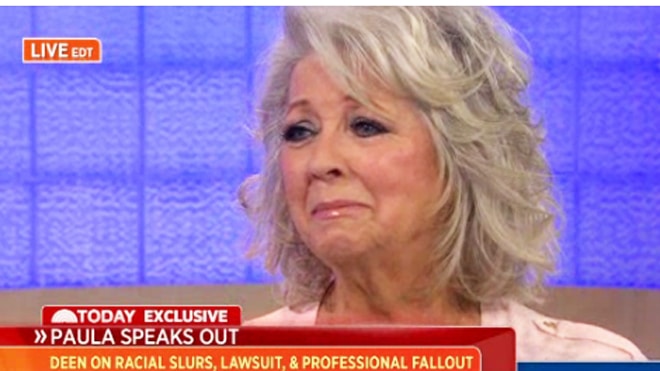 Things keep going from bad to worse for food matriarch Paula Deen who since this Tuesday’s appearance on the Today show has seen endorsement after endorsement fall by the wayside.

Also falling by the wayside now include Kmart,Sears, Walgreens with the general consensus that Paula Deen hasn’t really atoned for using the word nigger in public and the general attitude she may after all be a racist after her unabashed remark to Matt Lauer where she insisted she is what she is.

The new fall off comes off the back of high profile back offs courtesy of Caesars Entertainment Corp and Wal-Mart Stores Inc after the matriarch was dropped by the Food Network last week and Smithfield Foods earlier this week.

Perhaps what makes the latest snafus for Paula Deen is how quickly her previous supporters rushed to get through the exit doors as it soon became apparent that rightly or wrongly Paula Deen had become the poster girl for racism in the country. One supposes placating customer’s stymied nerves and coming off as amiable and racist free goes a long way in politically corporate America after all.

Then there were these reflections on the web that had me wondering as well:

First let me say , that her comments were wrong ,,,,with that said ,,how many of these companies support the Republican party, and their daily insults to every group of people that does not agree with them ? Why would we hold entertainers , to a higher standard than we hold the Politicians , ,,,? Ugly is ugly no mater where it lives

this whole round of bullying against a celebrity chef who happens to be a woman just shows our country will not allow for women to be titans of business….what about all those men on wall street who got off scott free for wrecking our economy? and got their $$$$ too!

if you don’t like what these companies are doing to her, show them by not purchasing their products, email them and demand she come back. When Chik-Fil-a went all anti gay on everyone, I quit buying their food. Haven’t since. You can have an opinion, but there’s only one way to make a difference and that’s with your wallet.

It would be nice if K-Mart showed a little consistency, though. The company dropped Paula Deen’s products, but they are still selling Kanye West albums and Quintin Tarantino films.