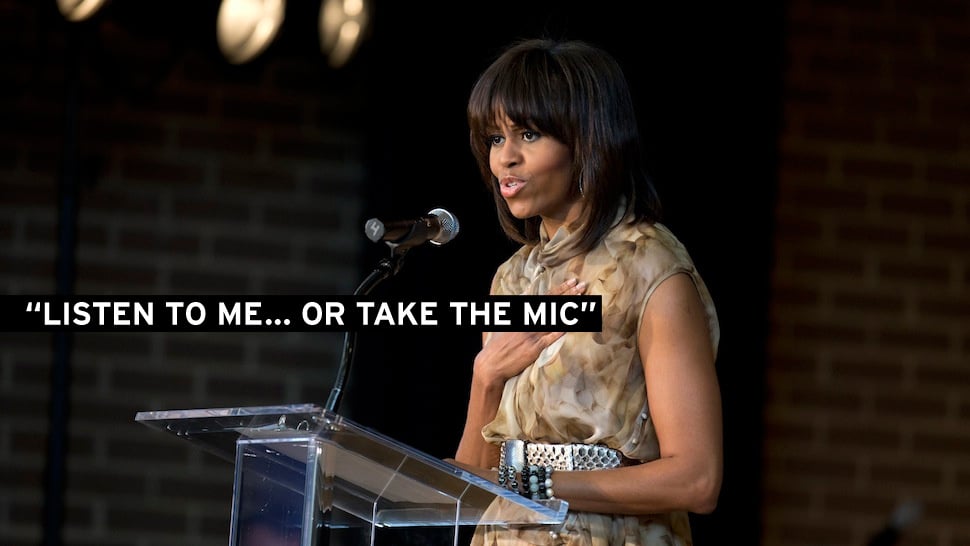 Yesterday evening saw an interesting spate of affairs where guest speaker Michelle Obama found herself being heckled as she attempted to deliver a speech at a Democratic Party Fundraiser when she was suddenly interrupted by activist Ellen Sturtz from LGBT right group GetEaqual.

At the time our heroine is said to have paused then confronted Sturz  ‘eye to eye’ (I know kids this was definitely the best part of last night’s $10 000 admission fee) before telling her the following:

“One of the things that I don’t do well is this,” she said to applause from most of the guests, according to a White House transcript. “Do you understand?”

A pool report from a reporter in the room said Obama “left the lectern and moved over to the protester.” The pool report quoted Obama as saying: “Listen to me or you can take the mic, but I’m leaving. You all decide. You have one choice.”

Kids tell me you’re not frothing at the gills? Here you are thinking you’re about to receive some mundane speech and suddenly you have front row to a cat and dog sparring match.

From there the crowd immediately began to shout that they wanted the First Lady to stay, and a woman seated near Sturtz told her, “You need to go!”

I know kids, this is real yummy stuff. Politely look the other way if you must…

It wasn’t too long before Sturtz then found herself being escorted out shouting at the same time that she was a “…lesbian looking for federal equality before I die.”

If only you wonder…

In an interview after the speech, Sturtz told the Washington Post she was caught off guard by the Obama’s response.

“She came right down in my face,” Sturtz said. “I was taken aback.”

Sturtz’s protest called for President Obama to sign an executive order that would prohibit contractors from discriminating based on sexual orientation or idenity. “I said I want your husband to sign the executive order,” Sturtz said. “Her husband could sign this order tonight and protect 22 percent of the work force in this country.”