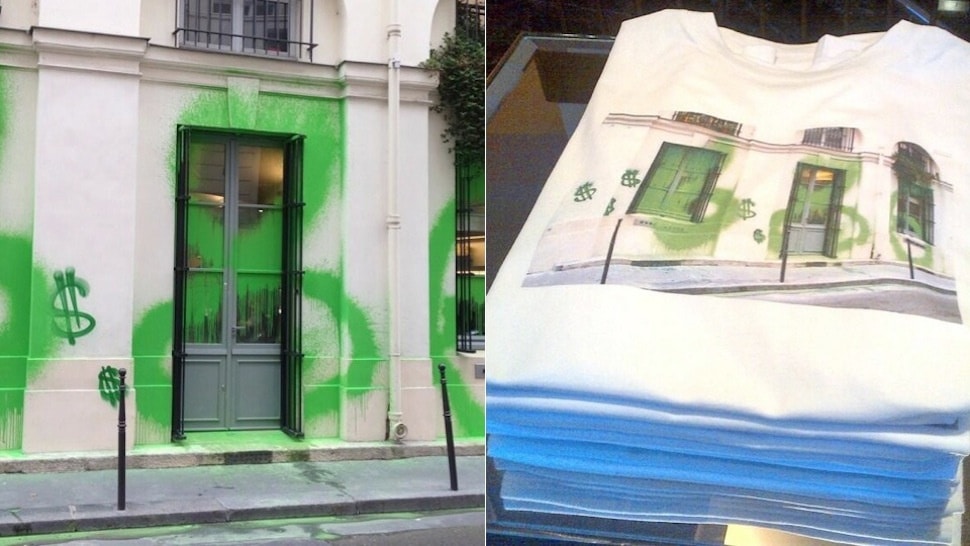 It seems Marc Jacobs keeps having the last laugh as graffiti artist Kidult continues to be stymied by Marc Jacobs and co who have once again have turned Kidult’s graffiti assault into haute couture artifice. Which is a code word for pricing that nasty shit sky high.

The fracas comes after Kidult took to Marc Jacob’s Paris outlet and spray painting it with large green 686 numerals which Marc Jacobs and co  immediately turned around into merchandising gear bearing the 686 motif for a pretty penny.

Marc Jacobs and co reacted similarly back in 2011 when Kidult then defaced the NYC flagship store, turning around and commissioning haute couture fashion times, including t shirts at the lofty price of $686. A tidy come back profit which undoubtedly inspired the latest scandal this time in Paris.

Tweeted the Paris outlet: ‘Come by Paris Collection for the opening night installation of the new @therealkidult. We proudly support the arts.’, along with a picture of the ‘art’.

Rather than falling victim to the assault and in essence corroborating Kidult’s efforts to embarrass the outlet, Marc Jacobs and co have simply turned the incidents on their head and have cleverly chosen to emboss the attempts at ridicule as good natured attempts at self mocking. At a tidy profit of course.

Tells the UK’s telegraph: It’s not Kidult’s first brush with designer brands – in fact, he makes it his mission to annoy as many as possible and stores belonging to Céline, Agnès B, Christian Louboutin, Hermès and Yves Saint Laurent have all previously felt the wrath of his anti-consumerism spray can.

Although one would think that Kidult might be stymied he ought to be pleased that Marc Jacobs and co has taken light of the fracas by turning the assault into must have haute couture pieces. Then again one wonders if Kidult and Marc Jacobs have a secret pact in place where one gets to lean on the designer’s fame and branding whilst Marc Jacobs gets to lean on the rebel status of Kidult. After all who doesn’t mind being associated as a cult status when most of your customers happen to be well to do elitists who can afford $686 shirts? Then again what elitist doesn’t mind pretending that they’re part of the cult rebel status when it all requires is taking out ones credit card?