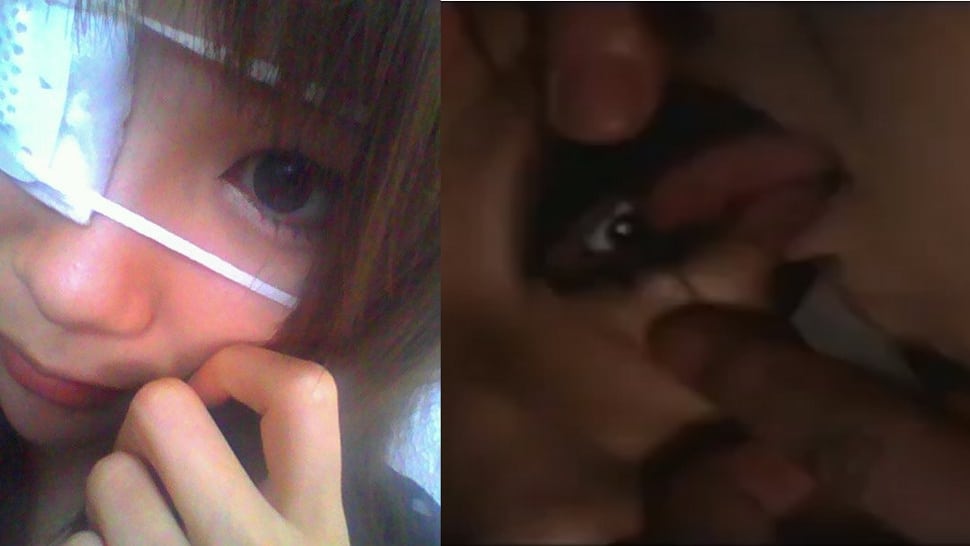 Explains huffpo: “….eye experts are worried that this dangerous fad is gaining popularity with preteens, especially after news reports of elementary school students in Japan who dared to test their ocular boundaries and caused multiple cases of pinkeye, otherwise known as conjunctivitis, the Daily Caller reported.

In one classroom of 12-year-olds, one third of students confessed to “worming” or being “wormed.” Officials only noticed something was up when some of the licked students showed up to school wearing eyepatches,ShanghaiList.com reported.

Eye patches? But think of the giddy high of having your eyeballs scantily licked at and the insides of your loins overflowing with joy right?

The beguiling  trend was recently exposed by the Japanese website Naver Matome.

Told a blog post: After class one day, I went into the equipment store in the gymnasium to tidy up. The door had been left open, and when I looked inside, a male pupil and a female pupil had their faces close together and were kind of fumbling around. Could it be bullying? I wondered, but when I had a good look, the boy was licking the girl’s eye! Surprised, a shouted “What are you doing? Stop it at once!” and the two of them were so shocked they jumped apart. The girl burst into tears, and the boy just went bright red and was shaken up. At any rate, to try to calm them down I took them to the janitor’s room and listened to their story.

Tells one local advocate of eyeball licking, Elektrika Energias, a 29-year-old environmental science student in the U.S. Virgin Islands: “My boyfriend started licking my eyeballs years ago and I just loved it. I’m not with him anymore, but I still like to ask guys to lick my eyeballs. I just love it because it turns me on, like sucking on my toes. It makes me feel all tingly.”

“I don’t ask just anyone to do it. Guys I like a lot are more likely to not think it’s so weird. I’ve never had anyone turn me down though.”

Explains San Diego ophthalmologist Dr. David Granet for those of you contemplating the good times:

“Nothing good can come of this. There are ridges on the tongue that can cause a corneal abrasion. And if a person hasn’t washed out their mouth, they might put acid from citrus products or spices into the eye.”

And then there’s this delicious prognosis too: Dr Phillip Rizzuto, from the American Academy of Ophthalmology, added that eyeball licking can cause blindness as the bacteria found in the mouth can damage eye tissue.

Explains Elektrika Energias:  “I got some weird offshoot of TB in my eye once. I ended up with corneal ulcers and I spent like a month in the hospital,” she said. “Nobody really knows why. Well, I got over it, and I’m fine now. That was like six years ago.

“I’m just safer now, I guess … Live and learn. I mean they don’t really make tongue rubbers, but maybe they should.”