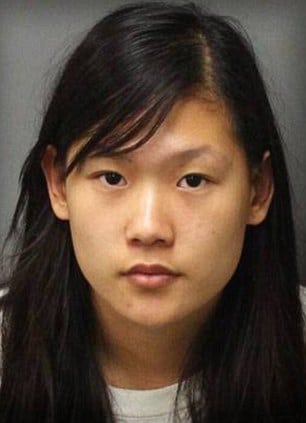 University of California student, 21 year old Barbara Wu has entered a plea of not guilty after being charged with soliciting a recent boyfriend to  kill an ex boyfriend.

The charges came after love interest Dennis Lin insists that Barbara Wu request that he kill a former boyfriend.

Told Lin: ‘She made me promise that I would go through with it,’

‘She wanted me to tie him up, use a bat to break his legs, kill him, then discard the body,’

‘She wanted us to leave the country after we did all of this to him.’

The written statement on behalf of Lin came after he contacted university police who in turn asked Lin to secretly record Wu discussing the plot.

Went on to tell Lin: ‘Since I’m now an ex-boyfriend who told police about her, I fear for my life.’

This despite the two having fought in the past and kissed and made up.

Curiously Lin goes on to make a point of describing Wu, a student at the school since 200 as ‘vindictive and impulsive.’

Then there’s interesting morsel: Four months before her arrest, Wu sought a restraining order against a former boyfriend, a 22-year-old university student. She contended she suffered physical and emotional trauma.

A temporary restraining order was granted for about two months, but court records indicate Wu withdrew her request for a permanent order.

The next day, according to the felony complaint, Wu followed, harassed and threatened an unidentified man.

It is also understood that Lin also wrote that Wu once told him, “I always get what I want. I don’t take ‘no’ for an answer.”

Because some chicks are bad ass to the bone…