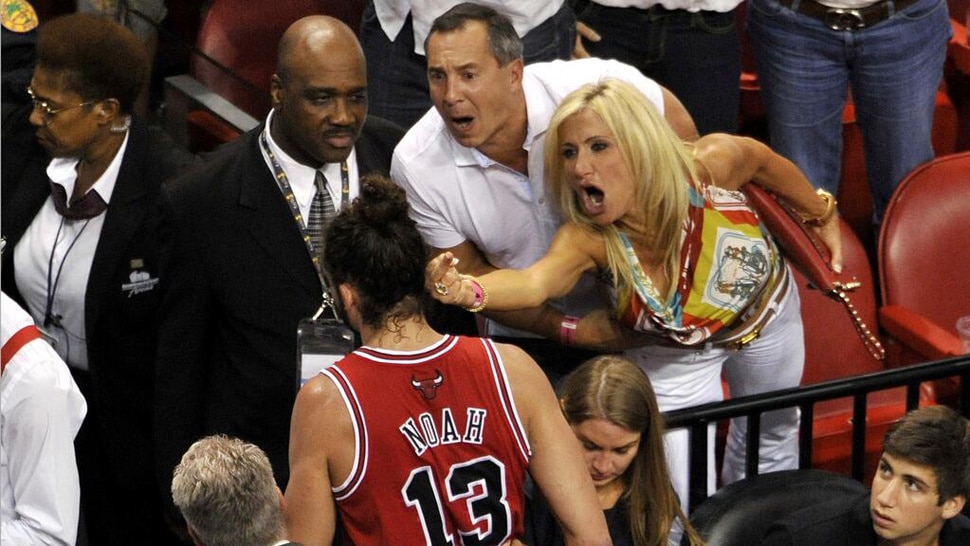 Kids it’s time to reach into your secret cache of the good shit as we sit back and take stock of the delightful blonde fireball that goes by Filomena Tobias otherwise known as ‘I’ll spit at you and defame you to the papers if my heart feels like it.’ Or in her neck of the woods as simply as the delightful Porsche-loving Palm Beach socialite once accused of drowning one of her ex three husbands.

Having caught the web’s imagination with her fireball antics it wasn’t long before her identity was revealed and stories of her off court behavior began to take center stage. And when we say off court behavior we really mean off the wall melodrama, not that Joakin Noah had not figured that shit out for himself as he did a voodoo dance with Filomena’s finger angling at his face.

In short Filomena Tobias’ delightful legacy goes something like this.

miamiherald: Her back-story reads like a Jackie Collins novel: Jersey-born secretary, married money, divorced three times, accused by a gay stripper named “Tiger” of kidnapping. She later hired a 300-pound psychic who would claim our she devil had confessed to drugging and drowning her fourth husband, CNBC commentator Seth Tobias.

Tobias, a Wall Street hedge fund manager, was found floating in the pool at the couple’s mansion on Sept. 4, 2007. The story of their party-hard life was documented in a 2008 New York Magazine opus titled “Dead Man’s Float.’’

Ghastly stuff but yummy. Here’s a fun excerpt courtesy of a 2008 nymag write up that had heads swirling back then:

Phyllis would often appear at the office and demand cash. “Give me 15,000 fucking dollars. Give me 15,000 fucking dollars,” she hissed on one visit, according to the former Circle T staffer. Tobias had promised Phyllis that he would stop using cocaine, but she didn’t believe him. In the fall of 2005, the couple was having dinner at Bice, a Palm Beach restaurant, with six other people. Just after sitting down, Phyllis jumped from her seat and placed her lips over Tobias’s nose and began sucking. She was searching for cocaine residue.

Billy Ash, Filomena’s therapist also went on to claim that Phyllis and Seth met at a sex party and their marriage was only one of convenience. He wanted a trophy wife and she wanted a rich husband. Billy also said that Phyllis once kidnapped a gay stripper named Tiger, because Seth was really into him and it made her jealous. It goes on and on and on… Phyllis was later cleared and she inherited a huge chunk of her late husband’s fortune.

Filomena’s other two husbands, Vince Racanati and stockbroker Arthur Tolendini, have not  commented on her character, but one imagines they were similarly taken. Her daughter with Racanti, reached by the Sun-Sentinel, reports that “[a]ll she has to say is that people need to get a life.”

Filomena’s other two husbands, Vince Racanati and stockbroker Arthur Tolendini, have not  commented on her character, but one imagines they were similarly taken. Her daughter with Racanti, Victoria Racanti reached by the Sun-Sentinel, reports that “[a]ll she has to say is that people need to get a life.”

And how did the Miami Heats react to their number one fan going the banal nutty?

At Thursday’s team practice, Heat forward Shane Battier said he appreciates “the passion” of the fans but said the woman’s rude gesture crossed the bounds of good taste.