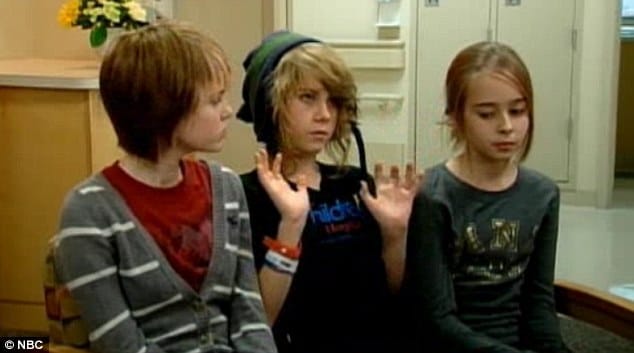 Ambri Tygard, a teenage girl injured after she got trapped under an elevator at her Oklahoma school in November 2011 is claiming that she has been left disfigured and in need of continuing medical treatment by the incident.

Along with her father, the now 14 year old girl is seeking redress to the tune of $100 000 in a negligence claim from the school.

What though makes the suit most beguiling is that she is the only one out of the three students involved in the incident to have filed suit. The other two individuals, Liz Smith and Savanna Gable who were also trapped at the Classen School for Advanced Studies have to date declined to join Ambri Tygard in her suit. That said it is said that out of the three students it was Ambri Tygard who suffered the most extensive injuries.

According to local media outlet newsok, Steece has declined to  provide a description of Ambri Tygard’s physical condition or say exactly how it is that she is disfigured.

Since the filing of the suit this past June of 2012, the school has adopted a view that the girls are entirely responsible for the misfortune they endured. This after district Superintendent Karl Springer went on to acknowledge at the time that the elevator in question should have been locked on account of it being old and in disrepair.

Reiterates newsok: Shortly after the Nov. 15, 2011, incident, district Superintendent Karl Springer said the door to the older, lift-style elevator should’ve been locked. Three days later, Springer said the door wasn’t closing properly and that it was due to be fixed when the girls walked into the elevator shaft after a friend told them there was something cool to see inside.

“If they’re guilty of anything, they may be guilty of curiosity,” Springer said. “It’s not their fault.”

Nevertheless the school’s attorney, Andy Fugitt has now gone on to offer the following view:

“Plaintiff’s own negligence was the sole cause of her injuries. Plaintiff was comparatively negligent, and her comparative negligence is in sufficient percentage to reduce or bar any recovery herein.”

With respect to the position that district Superintendent Karl Springer took at the time of the incident, Fugitt now tells the following:

‘Superintendent Springer was speaking out of great concern for the students involved and based upon the information then available to him.’

At the time of the accident, Ambri Tygard had told local media outlets the following:

“I didn’t think it was unsafe or anything. I just thought it was normal, until I looked up [and] realized, ‘This isn’t the elevator. This is the shaft room.”

Ambri went on to tell that within 30 seconds, the elevator that was three floors above, suddenly dropped, stopping just inches above them.

‘I couldn’t breathe because it was such a tiny space. My whole leg area was numb, I couldn’t feel anything.’

The girls were rescued 40 minutes later and were taken to hospital on stretchers by paramedics.

Ambri credited her friend’s combat boots with saving their lives.

‘[The elevator] came down right on her boot and stopped it.’

Then there were these reflections on the web that caused me to wonder as well:

There is no way they didn’t know that the elevator car was present when they stepped in. There has to be an elevator pit that they would have to step down into if the elevator car was not present. In this pit is the over run buffers and other equipment that would make it more than obvious the car wasn’t at the floor. I call Bull $ H i T! The three girls were screwing around and paid for it. The school should sue them and their parents.

It’s up to the school to create a safe learning environment for the kids, I was curious when I was in middle school and can’t blame the kids for being any less curious. At Eisenhower and John Marshall we knew the elevators were for the disabled students and staff, seems to me the elevator was lacking supervision and without knowing all the details the district should admit defeat and move on.

Even if OKCPS is partially to blame, all their lawyer has to prove is that the girl was at least 51% to blame for her injuries. If the lawyer can do that then the girl will recover nothing and the family might end up owing attorney fees if the judge rules that way. That is the way that comparative negligence works. However, if the lawyer fails to prove that she is at least 51% to blame then even if it is also this girls fault, she will recover full damages. It’s a big gamble.