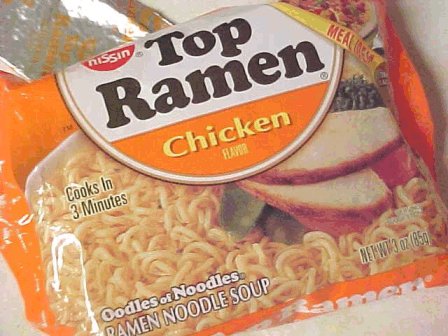 Georgi Readman, 18 of the Isle of Wright, UK has an interesting addiction of sorts. She is addicted to Ramen noodles.

In fact so addicted is Georgi Readman to ramen noodles, the teen estimates she probably eats up to 30 miles of the good shit during the year as she has come to now only insist on ramen noodles as her solitary dish.

The habit according to Readman began some 13 years ago and according to the teen who has gone on to build a tolerance for the dish, eating anything else simply makes her sick.

Tells the teen: “I hate the texture of fruit and vegetables. I can’t go to my friends’ for dinner or go out for meals because I don’t want them to see me freak out if the side salad touches the stuff I eat.”

“Mum goes to the supermarket and brings back as many packets as she can afford.

“I always fancy noodles and could easily eat two packets at once. I’ve even eaten them dry and uncooked before!”

According to experts who have studied Readman’s selective eating disorder, Georgi Readman’s eating habits may be the result of genetics.

Doctors on the other hand aren’t necessarily too pleased for Readman who they reckon is malnourished and weighing at 98 pounds at 5ft 3 has the the health of an 80 year old. Not that Georgi Readman is necessarily worried.

Tells one pediatrician, Lisa Kaufman: “In order to get off the noodles, she may need hospitalization and an education in nutrition.”

Isn’t it time you looked on the brighter side of life as you wearily munch on your own bowl of misery of ramen noodles and contemplate whilst for most of us the dish spells economic misery for some it spells liberation..