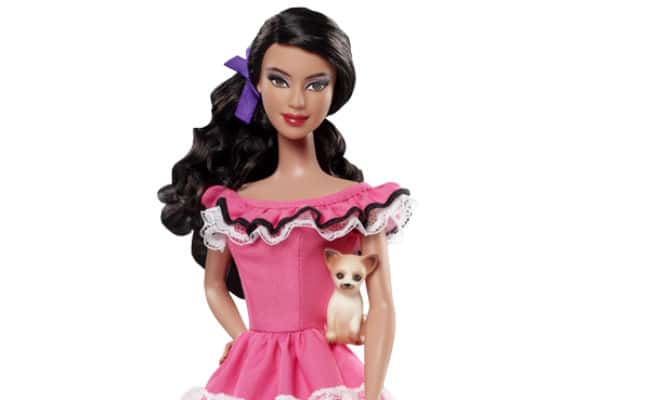 Because women have now found a new reason to be offended:

styleite: Mattel’s “Dolls of The World Collection” was intended to increase awareness of different cultures among the younger generation, but some of the dolls have women up in arms.

Why you wonder? Frankly from this (male) author’s point of view I can’t figure out where the diservice to Mexican women or women in general is. But maybe there’s something I am missing…

huffpo: Bloggers including Laura Martinez have protested the inclusion of a passport at all, suggesting that making special reference to the doll’s documentation is offensive.

On Cafemom’s The Stir, blogger Adriana Velez called the entire set a “missed opportunity” to teach about real cultural diversity.

Complaining that the Mexican doll’s costume was not only old-fashioned, but also inaccurate, she suggested alternative accessories like “a white blouse with colorful embroidery and a woven shawl.”

“[A]ll girls deserve dolls that enlighten them, not that talk down to them with this half-assed ethnic tourism,” she wrote, adding that a hairless dog — or even a Mexican bass guitar — would have been a more appropriate prop than a Chihuahua.

So female bloggers are up in arms because the dress sense is inaccurate? Which suggests there ought to be a more accurate representation of how some of us perceive Mexican women. But then again should we really be offended if a stereotype is too close to home or is that more to do with political correctness? Maybe if the Mexican doll had red hair and brown skin we’d all be piqued and wondering, but now that she has dark hair and dark skin and a traditional dress that’s hitting it too close to home? Then again can anyone really advise what a Mexican women ought to be looking like in the first place?

Responded Mattel once they caught wind of the heat:

And then there was this comment courtesy of a reader that summed it up fairly well for me:

hey did blow it on the costume which you would never see in Mexico, but I bet they made that same mistake with other national costumes. That whole line is a doll in costume with her pet and passport because they represent girls of the world NOT girls of America.

35 years ago Mattel came out with a couple of culturally ‘diverse’ dolls and I thought that was a nice touch to acknowledge beauty in ALL the pretty little ladies as well. I bought one for a tween and was horrified and really angry because her hair was extremely GREASY. It is only a matter of color and should have had the same texture as blonde, brunette or ginger Barbies. I already knew that black barbie didn’t have greasy hair and hers was black too. I complained all over the place, but they didn’t listen. I think that one died out because that greasy hair said a LOT about bias. That was then and this is now and Mattel has grown with the times. Give ’em some credit, enjoy the dolls and quit trying to make them into political statements.