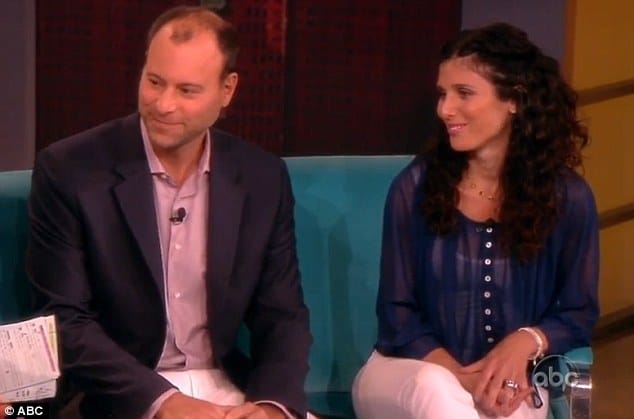 Causing a furore is a married couple’s assertion on morning tv show, ‘The View‘ who yesterday went on to say that their cheating website, ashleymadison for married people provides a ‘public service.’

The couple, Noel and Amanda Biderman also went on to say that in the three years their site has been up their business has trebled in the number of users, most of whom just so happen to be women.

To date the site has 17 million clients and is said according to the couple to be worth $90 million.

Noel Biderman went on to speculate that the site’s success has a lot to do with female infidelity with as many as 40% of females who accessed the site doing so via smartphone.

Incredulously he also went on to say that cheating can help a relationship, a claim that his wife and business partner disagreed with entirely.

‘But we have found over the years there are situations where it has helped convince somebody to stay with somebody. Or helped somebody have an outlet where they needed it and they can have an outlet in their lives.’

Which led to the duchess of good manners and moral codes, Barbara Walters to wonder out loud:

‘So you’re against it [cheating] but you just make money from it?’

Which then had Amanda Biderman responding as thus: ‘I have traditional values and I live in a traditional situation with Noel.’

Which of course is Amanda’s back hand way of saying under the radar:  ‘I live in a state of peace and love but I have no problem selling guns and battle axes to all them bixches who choose to use it to bludgeon each other with…because an easy dollar will always wipe the bitter stains of my conscious.’

Which is like Lucifer the devil claiming ‘If I don’t sell you the seeds of your discontent, inevitably someone else will so it might as well be me cause my ass too has rent to pay…’

Amanda Biderman went on to say that she and her husband have a monogamous relationship and that she would be devastated if he cheated on her.

The couple went on to contend that AshleyMadison is not creating cheaters but simply servicing a need that exists in society. Hmm. Really? Then again who can wonder given the growth of the site if the service is also now inspiring more peekaboo games too?

Isn’t it time you also turned to ashleymadison for your upcoming affair too…?

And then there was this that I happened to come across on huffpo that made me wonder as well:

Has running a site like AshleyMadison informed how you behave in your own marriage in any way?

Noel: Ironically, I talk about infidelity more than any man on the planet, so hopefully I can navigate a monogamous relationship more successfully than a lot of people. But even then, I don’t know if I can, but I’m going to try.

Monogamy is a man-made notion –- it’s not in our DNA. It’s not what we’re engineered for. We might think it’s a noble cause and something worth pursuing, but anything against our DNA is something we’re going to struggle with… I’ve seen study after study showing that the longer a couple is together, the more their sex life diminishes. I’ve yet to see any one where it says, “Twenty years later, those two are still hot and heavy” -– it just doesn’t play out that way. We’re working against something… So it’s with that knowledge base that I keep coming back to my own marriage in a different way. While we don’t have an open marriage in a sexual sense, we have a very open marriage in the sense that we can challenge and ask a lot of things of one another because we understand how important our marriage is and how often it can become turbulent.