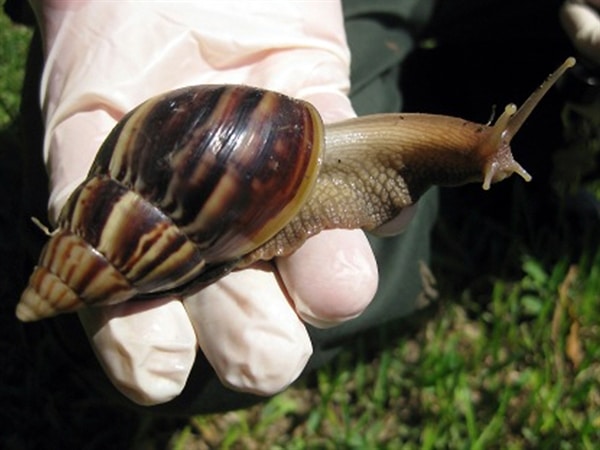 Here’s something that’s going on in Florida these days that you may or may not know about. It involves the sudden immersion of giant African land snails.  And they’re everywhere according to a report courtesy of Florida’s Department of Agriculture.

First detected in South Florida back in 2011, there has been a unprecedented proliferation of the rat size mollusks. Yes rat size.

To date over 117 000 have been caught and many thousands a week. And why are they being caught? Apparently they’re in the business of devastation.

NBC: “They’re huge, they move around, they look like they’re looking at you … communicating with you, and people enjoy them for that,” (tells a spokesperson for the Department Denise)Feiber said. “But they don’t realize the devastation they can create if they are released into the environment where they don’t have any natural enemies and they thrive.”

Denise Feiber goes on to note that the snails eat over 500 species of plants or ‘pretty much anything that’s in their path and green,’ as well as stucco and plaster. Grrr, grit your teeth…

In seven weeks, even more of the snails – each female can produce 1,200 eggs a year — will emerge from the ground after Florida’s rainy season ends. In some Caribbean countries, enough snails emerge that roads, lawns, and homes become covered with the creatures, resulting in damages to car tires and lawnmower blades, not to mention the slime and shit stains on building walls. “It becomes a slick mess,”

But in case you think you can just stomach the snails (and there are some types one can) there’s this too that may have you thinking twice about picking up the yummies and petting them:

The snails also carry a parasitic rat lungworm that can cause illness in humans, including a form of meningitis, Feiber said, although no such cases have yet been identified in the United States. Yet….