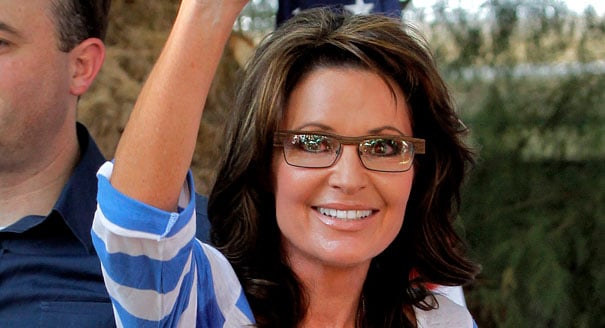 Kids just when you thought Sarah Palin had finally gone away she’s back by popular demand.

In an effort to remind us all that at some point Sarah Palin will be sliding down a frosty birthday cake and into your Republican nomination ballot box, Sarah Palin has carefully taken the time to reinvent herself as she once again positions herself as the messiah that will challenge all those big sleazy money bags and of course big bad sleazy media types (which would be me…).

Explains theatlanticwire who took the time to watch the full video below:

The ad is meant to encourage people to get involved with SarahPAC, Palin’s political action committee/bid for ongoing political relevance. Over the two minutes and 27 seconds it runs, more than a minute is spent showing clips of media entities praising Palin’s political savvy. Also squeezed in: Palin suggesting that consultants and PACs and the media don’t know what they’re doing.

Here’s the spot. It is called “Loaded for Bear,” and ends with a bear roaring, presumably just before it is shot.

Roaring before it’s shot? How quaint.

“Don’t let the big consultants, the big money men, and the big bad media scare you off,” Sarah Palin says. Then the video segues into a CNN clip.

And then there was this rather vocal comment left by one reader that had me reaching for one of them new cocktail recipes and a pack of cigarettes. Oh dear….

Palin is a con artist and flim flam person who fleeces people who are dumber that she is which is saying something. She is smart enough to take money from stupid, mediocre people who think Palin is somebody important who can get things done. The only thing Palin does is prey on the weak and stupid who like giving money to a stupid, irrelevant politician WHO HAS NEVER ACCOMPLISHED ANYTHING BUT TAKE MONEY FROM WEAK STUPID PEOPLE. Wake up America!! Do not give Stupid Sarah Palin anymore money and maybe she will go away and never leave Alaska again. Pray for a miracle and deliver us from evil, stupid Sarah.