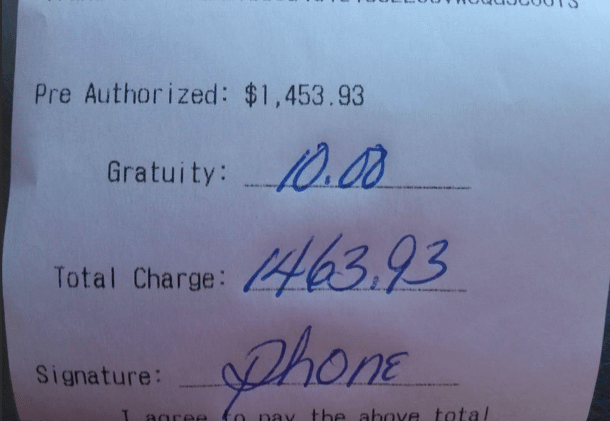 Tipping on the cheap is now beginning to irk servers and delivery attendants. But do they really have a claim in the first place?

The newest controversy to hit the tape with respect to ethical tipping concerns the case of one pizza delivery boy getting what they considered a measly $10 tip on a bill of $1463 worth of pizza.

The question on everyone’s lips now is was the delivery boy short changed considering the ethical dilemma that most servers are forced to live off their tips considering how lowly they are paid by their employers?

Reflects gawker: Emily Post says pizza delivery tips should be based on size of the order and difficulty of delivery, but sets the maximum at $5.

Slice, Serious Eats’ pizza blog, says big orders deserve at least a 10% tip (“never less”) — though that suggestion is based on a four-item delivery.

Finally, tipthepizzaguy.com has by far the most generous tipping rule-of-thumb: 15%. Their reasoning? “Instead of going out to a restaurant, the restaurant goes out to you.”

According to the site’s built-in pizza tip calculator, the person who purchased 85 pizzas should have handed the driver at least $219, and thank him or her for their service to our country.

Curious what others thought on the web I pulled out the following comments that made me wonder. Was the pizza delivery boy right to complain about what appears to be a low tip? Especially if you consider it was not a restaurant situation and or if it took the same amount of effort had he simply delivered $100 worth of pizza…and really at the end of the day how much extra special effort are you paying for someone to deliver your pizza as opposed to a seasoned waiter or bartender who knows their food and drinks?

I like all these pipedreams that the person who made the above delivery is entitled to $219 for fifteen minutes work. They’re not getting taxed, but should I tip the UPS driver differently when they bring me jewelry, rather than a book?

The obvious point is that tipping often doesn’t bear much relation to the task being performed. When you’re talking about a difference of a few bucks, it’s pretty trivial. But when you start to get into high numbers, it stops making sense to rely upon customary guidelines to determine how much you should be putting down for what amounts to a very simple service.

Is a guy delivering 85 pizzas working harder than a guy delivering, say, 3 pizzas? Absolutely. Should his tip reflect that extra effort? Obviously. Is he working so hard that $219+ accurately represents the value of his labor? Hell, no. Even if he spent two hours on that delivery, $109.50 is an absurd hourly rate to pay a delivery person. The fact that you needed a lot of pizzas doesn’t entitle whoever got assigned to your order to a jackpot at your expense.

It is sad the food service people have to depend on tips to survive. If the restaurant owners paid a decent wage then that wouldn’t be the case. Restaurant owners are just making more money by having the customers further subsidize their employees wages. Trickle down!

delivery charge doesn’t equal a tip. but yeah pizza delivery isn’t a percentage tip just like take out isn’t really a percentage tip. but $10 is on the cheap side for over a grand in pizza.