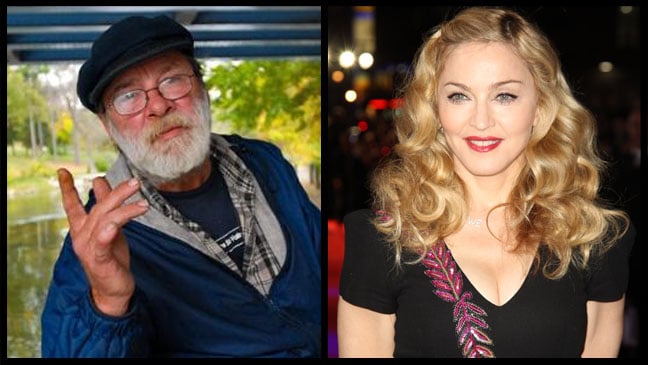 Madonna‘s brother, 54 year old Anthony Ciccone has taken to singing the blues as he has taken to telling how his famous (and very wealthy sister) ‘doesn’t give a sh-t if I’m dead or alive. She lives in her own world.”

Ciccone goes on to add for extra bite the following:

Ciccone who has since found himself living in disrepair and homeless for over 3 years now after losing a position he held with the family winery has also reflected that his father, Tony Ciccone has little love for him either.

“My father would be very happy if I died of hypothermia and then he would not have to worry about it anymore. He’s old school, he grew up in the depression. He doesn’t want to be bothered, he’s lived his life you see. He doesn’t like me. He doesn’t want me to be me, he wants me to be somebody else. He thinks the way I live is intentional. He simply doesn’t know me.”

Tells family friend Kathy Meteyer who goes on to tell how Madonna’s father and stepmother Joan were distressed by Anthony’s actions.

“He just can’t come back until he stops drinking, because they think it will kill him, it already kind of has,” Meteyer admits to the UK’s Daily Mail. “They have helped him so many times. Tony has put him through rehab and given him lots of chances. I think Madonna paid for rehab a few times. The alcohol has taken over his brain.”

Tells Anthony Ciccione: “I’m a human being, you can call me what you want. [Alcoholic] is a label, I don’t like it. I don’t need brain surgery, I merely need love and care of family and friends.”

“[I got] no family back up, when the chips fell, no family back-up,” he adds. “I’d rather be working. What would you do under these circumstances when your family has stood against you completely?”

The dailymail go on to reveal that they are terrified he could die at any moment and are devastated they can’t save him.

To add to Anthony Ciccone’s woes he recently spent a month in jail after being arrested intoxicated in a church and swearing in front of children.

Tony and Madonna have both gone on to publicly tell how they have paid for Anthony Ciccone to go to rehab on separate occasions but to date that arrangement has not worked and he now refuses to go back as they fear for his life.

Hmm, what’s the expression? Sometimes one has to hit rock bottom before they come clean with themselves. Seems like Anthony Ciccone incredulously has still got a way to go before he hits rock bottom. But at least he has his self respect and dignity intact. Or does he….?

If only Anthony Ciccone could attempt to love himself before he demanded others love him… of course easier said than done.