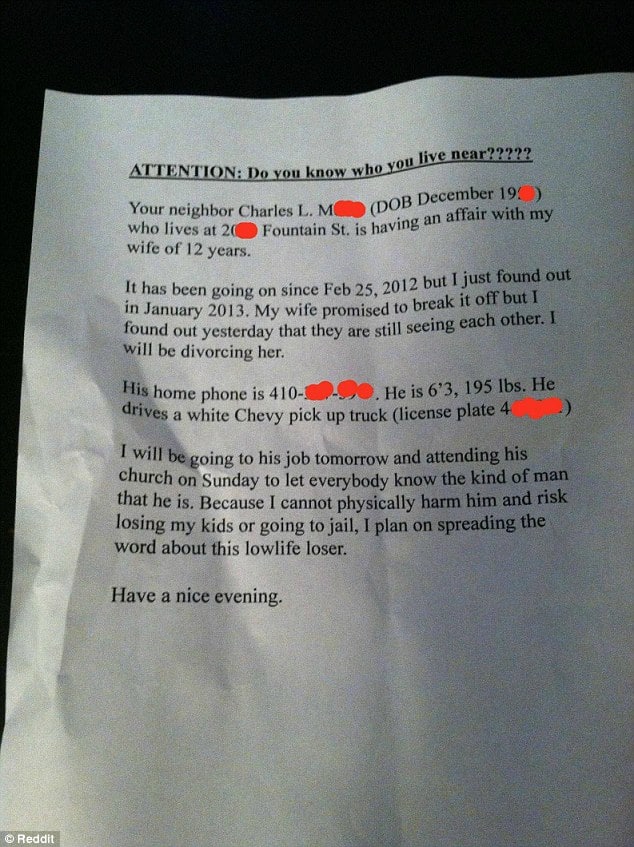 A scorned husband has taken revenge on a cheating wife not by going to the courtroom but by exposing her to in her lover’s neighborhood, workplace and church.

The incriminating letter begins as thus: ‘ATTENTION: Do you know who you live near?????’

‘Your neighbor Charles … who lives at … is having an affair with my wife of 12 years.’

The letter goes on to include the man’s full name, license plate and phone number.

‘It has been going on since February 25, 2012 but I just found out in January 2013. My wife promised to break it off but I found out yesterday that they are still seeing each other. I will be divorcing her.’

Hmm, interesting. But it gets better…

‘I will be going to his job tomorrow and attending his church on Sunday to let everybody know the kind of man that he is,’ he threatens.

‘Because I cannot physically harm him and risk losing my kids or going to jail, I plan on spreading the word about this lowlife loser.’

The letter which made its way on social media outlet reddit has led to a flood of comments, some of which I decided to post that made me wonder about the nature of failed marriages, deceit and the things that we sometimes feel compelled to do in order to reassert our own sense of self. Not that will necessarily stop the couple from continuing to see each other in the future. Or will it?

This isn’t really passive aggressive, this is overt social aggression.

It’s aggression using social (micro-) interactions as the instrument. Instead of physical aggression where he’d use force to acheive his ends, he’s using social capital to shame/ostracize.

But the point is it’s definitely overt, not passive.