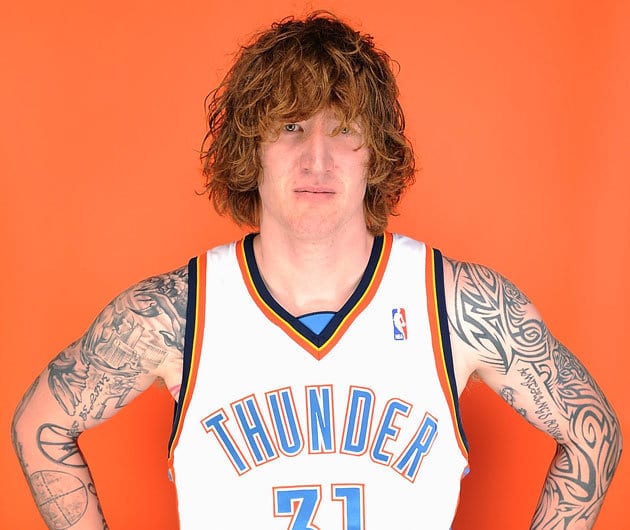 The fall of a rising star.  A question of denial or just continued bad behavior?

For a while it looked like Robert Swift would rule the NBA as he was handpicked back in 2004 as the newest entrant of superstars.

Unfortunately for Swift he was never able to break the grade but nevertheless he did manage to earn himself $20 million until things fell apart and by 2009 he was out of the fast money pool. And soon after that out of the money he earned after squandering it.

Nevertheless the 27 year old did manage to buy himself a sprawling house to the tune of $1.35 in the upmarket Seattle suburb of Sammamish in 2006. Except it wasn’t too long the house’s financing and state of appearance began to mimic that of the declining fortune of the one time Seattle Supersonic player.

Tells the UK’s dailymail: The garden is littered with empty Budweiser, Four Loko and Coors Light cans, while a sign attached to the front door reads ‘Danger men drinking.’

A garage window has a bullet hole in it, while outside sit several cars which look like they haven’t moved in some time. One is missing a bonnet.

The property, with buckets of festering water dotted along outside it, sticks out like a sore thumb in the wealthy Eastside suburb.

Nevertheless a new owner picked up the property for half the original price back in January but hasn’t been able to do anything with the place as Swift refuses to move out.

Tells the new owner  who wishes to remain anonymous via KOMO4: ‘And it seems like a very sad story and I definitely feel for him.’

Reflected a commentator on the web: Obviously a self inflicted failure. No sympathy here.