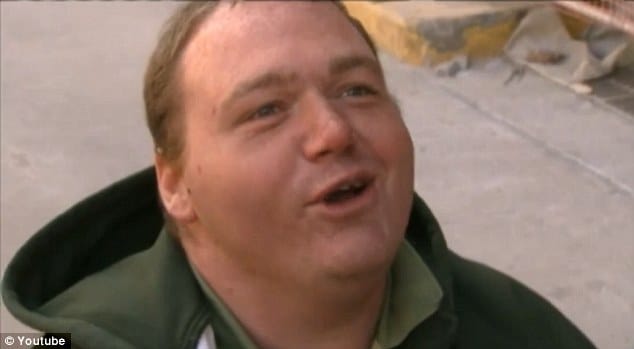 Gary Thompson,  a Lexington, Kentucky man, spends the greater part of his day pretending to be mentally and physically handicapped begging for handouts. For his efforts he reckons he clears easy over $100 000 a year from would be donors in a good year.

Although involved in a motorcycle accident in 1993 that left him with physical problems and difficulty walking he is far from paralyzed as he purports to would be donors. Coincidentally the accident left him with an award of $2.4 million which he and his family went on to spend in its entirety.

Nevertheless when it comes time to begging, Thompson instead lets on that his family took the award whilst he was incapacitated.

To affect the illusion of paralysis and mental handicap issues Thompson chooses to maneuver and contort his hands and body in such a way that to the untrained eye his story is plausible.

With his scheme by now having gotten round, one media outlet, LEX 18 passed by and decided to confront him with Thompson laughing that he has no plans of stopping his scheme any time soon.

In fact after the confrontation Thompson showing no remorse simply chose to wheel himself to a new destination. In front of a police station.

‘I appreciate you guys busting me,’ Thompson told a reporter at the time. ‘Yeah, I’m really good at it, really good. I clear about 100,000 dollars a year doing this.

Not bad considering that the average household income in Kentucky is circa $42 000.

A woman who gave Thompson money told LEX 18 that she was shocked by his scam.

“He got me! I don’t make that much money, but I reached into my pocket, and gave him everything I had. Six dollars at the time,” Judy McKinney said.

But it gets worse, not only can Thompson speak and use his arms properly, but he has a degree in speech pathology that allowed him to mimic a mentally disabled person.

I know why use your degree when panhandling is really your cup of tea?

Thompson has reportedly been charged twice this year over his scheme and pleaded guilty on both occasions. Can anyone guess when he will be charged next for his scheme?