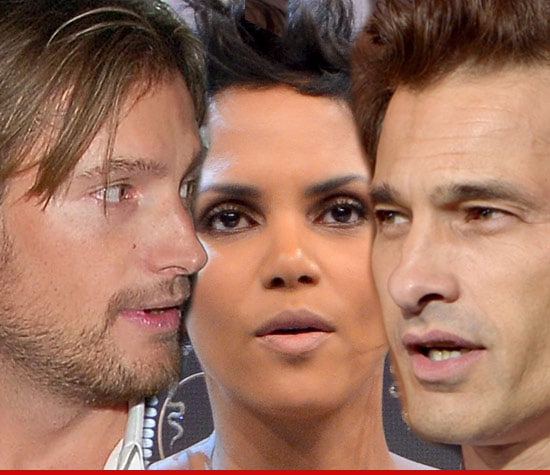 And for Thanksgiving there was a brawl on Halle Berry‘s front lawn starring her current and former boyfriends…hawt bixch 1 vs hawt bixch number 2.

Whilst you and I spent yesterday exchanging pleasantries with family and friends, during America’s great national past time, Thanksgiving dinner, Halle Berry’s foreign born boyfriends spent yesterday beating the hell out of each other before being carted off to hospital to get themselves treated for broken hands, faces, ribs, whipped necks and damaged egos. But then again this is what you get when you star in the Halle Berry too steamy for you love triangle.

The brawl is suppose to have gone down after Gabriel Aubry, Halle’s former ex dropped off little Nahla, their love child off at baby mamma’s house for mamma’s thanksgiving lunch with her new hawt bixch, Olivier.

Apparently shit has been real tense around the Halle Berry love triangle posse after Halle tried to get up and leave and go live in France with that other French bixch Olivier and her baby Nahla. Yet when Gabriel caught wind off that shit he was off to the judge complaining that that shit was not fair on account of him, the baby’s father, living in LA, and him being deprived of visitation rights if Halle, Nahla and her new squeeze, Olivier all went trotting off to France without Gabriel.

During the fight Olivier being the action star that he is attempted to perform a citizen’s arrest on his love rival Gabriel. For his troubles Gabriel had his ass issued with an emergency protective order to keep away from Halle, Olivier and Nahla as well as having to pay a $20 000 bail bond.

This mother needs to get her priorities straight and understand that just because she’s done with Gabriel does not mean their baby girl is done with him as well. HB and OM are too busy thinking of their relationship and ignoring the one Nahla has with her dad. Gabriel must feel reduced as a father now that his daughter is bonding with Olivier, the man behind the reason Halle wants to take Nahla to France to live. How threatened must Gabriel feel by Olivier, by the courts, and by his ex? This is a tricky patch for many parents and step-parents. But dignity has a cheap seat in the back on this one and it’s really up to Halle Barry to soft-pedal this situation and make it right. It starts by diffusing and disengaging from the anger, and remembering that the one who’s at centre stage here is Nahla.